(What the…? – Promoted by Colorado Pols) 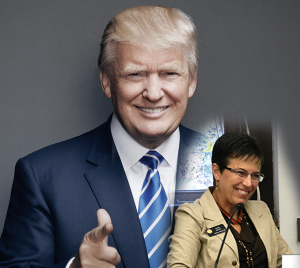 With Colorado’s largest media outlets (TV and print) mostly AWOL when it comes to covering the most important race in the state this election season, we’re left to talk radio hosts, bloggers, and other shoe-string entities to offer voters the basic information they need to vote and understand what’s at stake Nov. 8.

So, how’s that working out? Not well.

Kaminsky is smart enough to know that the Woods’ Arvada race against Democrat Rachel Zenzinger is probably the most important election contest in Colorado, with control of state government likely riding on the outcome. Yet, he sits silent or cheerleads as she makes outrageous statements, without offering context or fact-checking.

At one point, for example, Woods made the off-the-moon claim that her opponents who criticize her for forgiving Donald Trump for lewd comments are attacking Woods’ religious freedom. Woods is a longstanding Trump supporter.

“I’m being called out because I’ve chosen to forgive Donald Trump’s comments [about sexually assaulting women] and support him continually,” Woods told a loving Kaminsky. “So, that’s an attack on religious freedom.”

Kaminsky, who talked at length about attacks on Woods and spending on the Arvada race without mentioning Woods’ record on public lands or her moneyed backers, asked Woods what would happen if she lost her seat.

Woods said, under Democrats, “oil and gas and mining in our state shut down, those people put out of work.”  Shut down!

“[Democrats] are going to tell parents, you know, they have to vaccinate all of their children,” Woods continued on air.

How could Kaminsky have let this fly into his ears without words of horror coming out of his mouth?

Woods is known to be against basic public health protections when it comes to vaccinations. She wants to make it easier for parents to forgo vaccinating their kids—putting public health at risk. Voters need to know about where she stands.

Woods concluded the interview by calling Bill Clinton “a rapist,” to which Kaminsky responded not by pointing out the falsehood but instead with, “pretty courageous of you to say so, as someone running for office.”

“I wish you all the best,” concluded Kaminsky, who did not immediately respond to a request for comment. “And happy to have you back on the show anytime. Thanks again for everything you do for us in the state senate.”