UPDATE #3: Via the Boulder Daily Camera:

Donald Trump Jr.’s campaign appearance in Boulder this afternoon has been moved from The Sink to a commercial space on Pearl Street after the owner of the University Hill restaurant complained he had been unaware of the event.

The event is now scheduled to take place at 4:30 p.m. at 714 Pearl St., an unoccupied commercial space owned by developer Stephen Tebo.

Somebody get Junior a new advance man.

UPDATE #2: Junior’s event in Boulder is still on, somewhere:

Donald Trump Jr. is moving his event in Boulder after the owners of “The Sink” said it was not supportive

UPDATE: The Sink’s owners put the kibosh on Junior’s campaign event inside their restaurant:

Donald Trump Jr. is welcome to visit the The Sink, but not to hold a campaign event on the restaurant’s premises, owner Mark Heinritz said today.

Guess he should have asked permission. 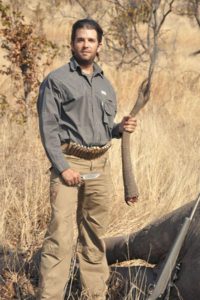 As the Boulder Daily Camera reports, Donald Trump Jr. is making a campaign stop in the People’s Republic on behalf of his pa this afternoon:

Donald Trump Jr. will travel to Boulder on Monday to speak with supporters of his father’s presidential bid and campaign volunteers, the Donald Trump campaign announced Sunday morning.

Trump’s son is scheduled to appear at 4:30 p.m. Monday at The Sink, 165 13th St., following a morning campaign appearance in Centennial, according to an email from the campaign.

Junior’s campaign stop at The Sink appears to be news to…well, The Sink:

Laura Thoman, a manager at The Sink, said Sunday afternoon that no one from the Trump campaign had contacted the restaurant.

“We’ve had a lot of famous people here, but we usually get some advanced warning,” she said.

No other details of the Boulder event have been released.

The Sink released a statement that makes little attempt to hide their displeasure over the Trump campaign’s presumptuousness:

The Sink would like to thank the Denver Post and the Daily Camera for making us aware of the Trump campaign’s plans to use our restaurant as a campaign location while Donald Trump Jr. is in Boulder, Colo. Normally, organizations ask permission to use our property–we would like to make clear that the Trump campaign has not asked for our permission or made any attempt to contact us. We did not organize or encourage this event to happen. [Pols emphasis]

The Sink says they will nonetheless accommodate Junior’s unsanctioned presence, because “discrimination is still a primary issue in our society”–and they hope Boulder residents will respect The Sink as “an organization that is willing to remain accessible to all political and personal viewpoints.” Zing!

Why didn’t Trump’s campaign feel the need to even ask permission? You already know the answer, Boulder:

Because when you’re a star, they let you do it. You can do anything.