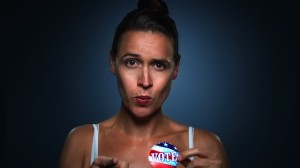 Late last month, CBS4 Denver’s Brian Maass ran a story that’s been stirring a great deal of alarm among the right wing’s perennial “vote fraud” conspiracy theorists–a report that identified a handful of cases, in which voters in Colorado who were deceased had votes cast in their name:

A CBS4 investigation has found multiple cases of dead men and women voting in Colorado months and in some cases years after their deaths, a revelation that calls into question safeguards designed to prevent such occurrences…

The cases of dead men and women casting ballots ranged from El Paso County in southern Colorado to Denver and Jefferson County. CBS4 discovered the fraudulent voting by comparing databases of voting histories in Colorado against a federal death database.

“It’s not a perfect system. There are some gaps,” acknowledged Williams.

The story’s lede used the word “multiple” to describe the number of cases of dead voters casting ballots, though the original story described four such cases–and none newer than 2013. One of those cases was later explained by a clerical error. Last night, a followup report from Maass announced with great fanfare the discovery of one additional case:

An ongoing CBS4 Investigation into dead voters in Colorado has turned up another dead voter — this time in Larimer County.

“I don’t think it was an accident,” said Larimer County Clerk and Recorder Angela Myers, who acknowledged she found the most recent dead voter after the initial CBS4 Investigation entitled “Dying To Vote,” which aired last month. That initial investigation found a handful of votes cast in the names of dead Coloradans months, and sometimes years, after they died.

Myers said following that report, the Secretary of State sent her a list of deceased voters to double check.

“We did find a single deceased voter,” she said, “and unfortunately it was counted.”

That brings the total number of “dead voters” discovered in Colorado to either four or five depending on whether you count the original report that turned out to be incorrect. That means several weeks of heightened scrutiny of voter registrations after the first CBS4 report resulted in only one additional case of a dead person “voting.”

To be sure, there is no responsible argument that these four or five cases of probable vote fraud should be ignored–not even literal one-in-a-million cases as these appear to be. Vote fraud is a crime, and especially in a mail ballot election system like Colorado’s it’s important  that any violators be swiftly prosecuted to the limit of the law. That is being done right now with these cases, as clerks work through the information they’ve been given and refer findings to prosecutors.

But never mind all that boring factual stuff, folks! The conservative media has its own version: 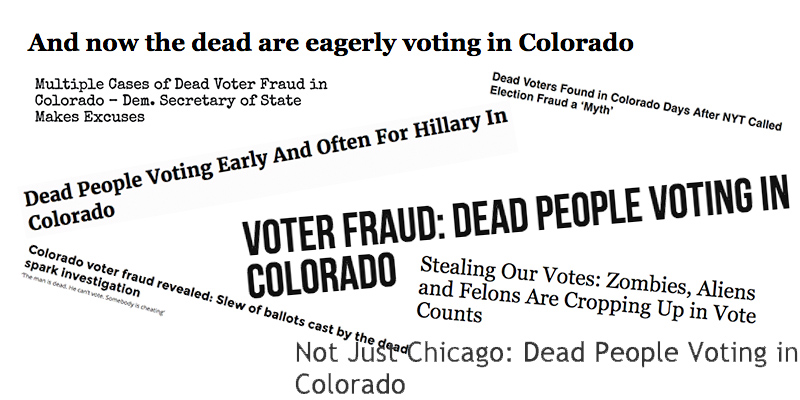 Brian Maass and CBS4 deserve some criticism for the ridiculous hyperbole flooding the conservative media today based on his report of four or five “dead voters” among nearly four million registered voters in Colorado. Maass’ reporting intentionally downplayed the actual number of cases, using words like “multiple” when “several” or even the correct single-digit number would have been more accurate–if less sensational. But the bigger problem is with the conservative media outlets completely untethered by a need for accuracy who distorted Maass’ report into something vastly worse than the facts support.

Williams said measures implemented in 2015 should reduce the number of dead voters casting ballots in Colorado, [Pols emphasis] but he noted that the CBS4 investigation indicates further measures might be necessary.

Yes, any improperly cast vote is a problem. But as you can see from the actual numbers described here, a draconian solution like what the right wing desires to “combat vote fraud” would disenfranchise far more perfectly legitimate voters than the totality of this problem. That’s a great approach if your goal is to reduce the number of people who vote, but not so much for ensuring fair and accessible elections.

The moral of the story? Don’t believe the hype. Or the hyping of the hype.