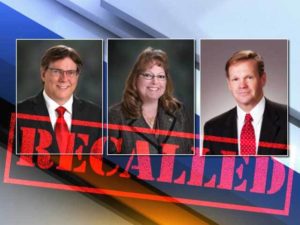 We took note a few weeks ago of the gobsmacking announcement by Donald Trump’s presidential campaign that Ken Witt, the recalled ex-president of the Jefferson County Board of Education, has been selected as an “education co-chair.” Less than a year ago, as everyone with any knowledge of Colorado politics is well aware, Witt and his two fellow conservative activists comprising a majority were thrown off the Jeffco school board by an overwhelming majority of voters. The Jeffco school board recall was a national story over the course of months in mid-to-late 2015, and the crushing defeat for these three conservative “reformers” has been interpreted as a major setback for the larger right-wing “Separation of School and State” education agenda.

Politically, Trump taking on the baggage of this recall by elevating Witt goes beyond whether or not it makes political sense, which is of course does not. It invites very basic questions about the wisdom of the Trump campaign–at least in Colorado. Jefferson County is considered a bellwether for the state as a whole, with a large politically diverse suburban middle-class population that often proves decisive in statewide elections. In is not an exaggeration to state that the Trump campaign has chosen one of the most demonstrably unpopular political figures in recent Colorado political history, certainly in Jeffco history, to front for them with the voters.

Witt is the Trump campaign’s official surrogate in a guest op-ed in the Denver Post today:

I was encouraged to hear Donald Trump unveil his school choice policy earlier this month, because school choice made made such a difference for my family. Trump committed to provide $20 billion in existing federal spending to states in the form of block grants, so more at-risk families can find the best educational fit for each student, allowing every child to realize their full academic potential…

I am hopeful to once again have a president in office who understands that one size does not fit all, and that our students best succeed when they can each find their own best academic setting in which to thrive.

Witt’s forgettable anecdotes about school choice helping his family, an issue which hasn’t really come up on either side as a campaign issue, won’t distract Jeffco voters from the fact that Ken Witt is the author of the pro-Trump op-ed in today’s Denver Post head-to-head. The pro-Hillary Clinton side was represented by former Colorado Governor and Los Angeles Public Schools superintendent Roy Romer, whose relative credentials to speak about education policy…for pity’s sake, do we even need to say it? This “matchup” is an insult to Gov. Romer, and your intelligence too. And politically, it’s so incredibly foolish it leaves us at a loss for words.

In a perfect world, Witt re-emerging from his disastrous recall as Trump’s education spokesman would be nationally lampooned–at least earning the attention that last year’s recall of Witt and the right-wing school board majority itself did. At the very least, it’s an incredible mistake to make in Colorado’s most-watched suburban battleground, and it will cost the Trump campaign dearly with voters in Jefferson County.

And to whoever thought this was a good idea…seriously, get your head examined.