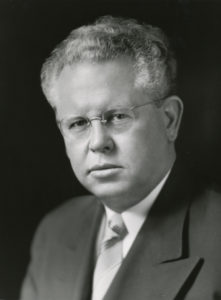 A press release from Democratic presidential candidate Hillary Clinton’s Colorado campaign announces a new group of Republican advocates for her election over Donald Trump–the “Ralph Carr Republicans,” named after a Colorado Republican governor whose compassion made him a hero long after his political career was over:

Tomorrow, Wednesday, September 7, Hillary for Colorado will launch Together for America: Ralph Carr Republicans. Invoking the spirit of Colorado’s 29th Governor, a Republican who opposed the internment of Japanese-Americans despite popular sentiment at the time, Ralph Carr Republicans is a core group of everyday Colorado GOPers who are putting country before party and backing Hillary Clinton for President.

Ralph Carr Republicans will lead the Hillary for Colorado campaign’s recruitment and outreach to the growing number of Republican and independent voters in the Centennial State who believe that Donald Trump is too dangerous and unfit to be commander in chief. Ralph Carr Republicans recognize that Hillary Clinton understands the complex and volatile world we live in and has the experience and temperament to be president, while Trump does not…

Also on hand at tomorrow’s press conference to speak about Governor Ralph Carr’s legacy will be Terie Miyamoto, a Japanese-American from Centennial whose mother was interned during WWII and whose father was a WWII veteran born in Denver.

The story of Gov. Ralph Carr’s profound decency in response to the internment of Japanese-Americans during World War II was not fully understood during Carr’s own lifetime. Carr’s political career ended after his defense of Japanese-American evacuees relocated to Colorado, losing his bid for election to the U.S. Senate in 1942 to Democrat Edwin “Big Ed” Johnson. Johnson derided Carr as a “Jap lover,” and proposed (sound familiar?) closing the borders of the state with National Guardsmen to prevent their relocation.

Today, history has decided who won that debate–and it’s not the man who won the 1942 U.S. Senate race.

Given the extreme state of the debate over immigration in the United States today, and the rhetoric coming from one political party in particular on the issue–Ralph Carr’s party, at least nominally–we think Gov. Carr would approve of the “Ralph Carr Republicans.”