We were alerted to this Facebook post by GOP Sen. Laura Waters Woods of Arvada a short while ago today: 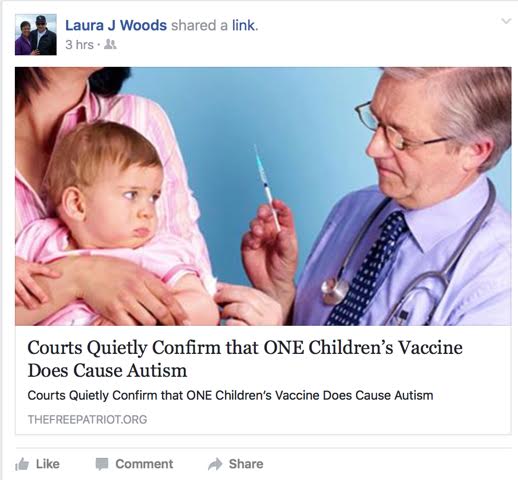 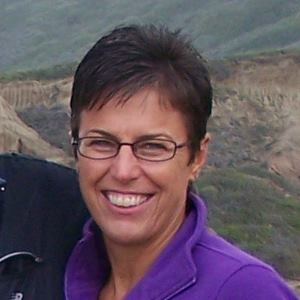 As many of our readers know, Sen. Woods’ out-of-the-mainstream views on vaccines have surfaced a couple of times in her legislative career, most damagingly in 2015 when she joined Sen. Tim Neville to support the ill-fated “Parents Bill of Rights” legislation that would have made it even easier to opt school-age children out of vaccinations. Vaccines are just one of a number of issues that have Republicans very nervous about Woods as she campaigns for re-election in swing Senate District 19.

Safe to say, the story she just posted on Facebook isn’t going to help:

In December 2012, two landmark decisions were announced that confirmed Dr. Wakefield’s original concern that there is a link between the MMR vaccine, autism and stomach disorders. The news went mostly unreported, but independent outlets like The Liberty Beacon finally began publishing the groundbreaking news.

The website wrote last month, ‘In a recently published December 13, 2012 vaccine court ruling, hundreds of thousands of dollars were awarded to Ryan Mojabi, whose parents described how “MMR vaccinations” caused a “severe and debilitating injury to his brain, diagnosed as Autism Spectrum Disorder (‘ASD’).”’

The Liberty Beacon went on to describe the second court ruling that month, as well as similar previous verdicts writing, ‘Later the same month, the government suffered a second major defeat when young Emily Moller from Houston won compensation following vaccine-related brain injury that, once again, involved MMR and resulted in autism…’

The story Woods linked to, posted to an obscure website called “The Free Patriot” and dated August 16th of this year, is in fact a story from August of 2013 published on a right-wing website called “The Liberty Beacon.” The intent of the story appears to be to vindicate the discredited views of anti-vaccine researcher Andrew Wakefield. The wild claims in this story were themselves debunked years ago, as numerous publications have documented in the subsequent three years:

Andrew Wakefield has not been proven right.

There have been no landmark events to prove that Wakefield was right.

There was no government concession in US Vaccine Court. The Ryan Mojabi case was about encephalitis, not autism. So vaccines still don’t cause autism… except when Dr. Bob Sears states that they do, but they still don’t.

There was no groundbreaking scientific paper.

Andrew Wakefield has not been proven right.

And everyone still thinks that Wakefield’s article linking the MMR vaccine and autism was fraudulent.

In short, Sen. Woods read a reposted three-year old story on what looks like a spammer content thief website that falsely attempts to vindicate the man who discredited himself by claiming vaccines cause autism. And then she posted it today like it’s new information.

Next time somebody tells you Colorado’s most vulnerable state senator isn’t off the deep end on the issue of Colorado’s pitiful vaccination rate for school-age kids against preventable diseases, you’ll know better.

With one Facebook post, Woods just did more to prove her detractors correct than anyone else could.