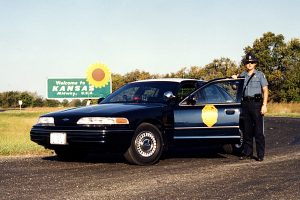 The claims consistently maintain that law enforcers in jurisdictions beyond this state are more apt to stop vehicles for marijuana-related searches if they’re outfitted with Colorado license plates.

In the strongest ruling on this topic to date, the 10th Circuit Court of Appeals says that Colorado license plates alone are not nearly enough to sanction a traffic stop.

The case is based on a lawsuit filed by Peter Vasquez against two Kansas state troopers, Dax Lewis and Richard Jimerson — and the incident itself took place nearly five years ago.

As the story goes, these two Kansas highway patrolmen decided basically on the strength of a car having a Colorado license plate that a search of the vehicle was justified–after all, Colorado has legal marijuana, and Kansas doesn’t. Isn’t that probable cause enough, say the Jayhawkers?

The answer, of course, is hell no it’s not. Simply residing in a state where marijuana is legal does not ipso facto make one a suspect for transporting marijuana across state lines. Colorado does have a higher percentage of pot smokers than the national average, but the Colorado Department of Public Health and Environment says the number is a little less than 14% of our state’s population.

And sorry Kansas, but probable cause that isn’t.

If you’re one of the 86% of Coloradans who doesn’t smoke weed–and even if you do, since it’s perfectly legal here–Kansas asserting the right to pull over Coloradans just for being Coloradans could reasonably be considered very offensive. In a state already facing economic problems due to extremely poor fiscal management by ideological conservatives, this doesn’t seem like the way to encourage folks to drop tourism dollars there–or even drive through. Fortunately, there is something you can do about it:

Take the long way to Kansas City next time.