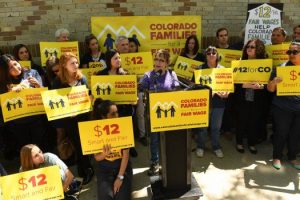 A release from Colorado Families for a Fair Wage celebrates the qualification of Amendment 101, a measure to raise Colorado’s minimum wage to $12 an hour by 2020, for this year’s general election ballot:

A coalition of business owners, workers and supporters with Colorado Families for a Fair Wage had submitted 200,000 signatures, more than double the 98,492 signatures needed to qualify, showing overwhelming support for the measure.

“Our coalition of business owners, workers and supporters is energized by the voters’ enthusiasm for our ballot initiative to raise the minimum wage to $12 by 2020,” said Lizeth Chacon, Colorado Families for a Fair Wage co-chair. “Raising the minimum wage is smart and fair. It’s smart because when working people have more money in their pockets, they spend it here in Colorado, boosting our economy and helping our communities thrive. It’s fair because people working full time should earn enough to support their families.”

Extensive research shows that modest raises in the minimum wage like this proposal helps the economy by increasing consumer spending – and does not result in job loss in sectors most likely to hire minimum wage workers. Because low and middle-income workers are more likely to spend pay increases than higher paid workers, each $1/hour wage increase creates a ripple effect in spending, generating $1.20 in the local economy, potentially leading to further job growth.

“We are solidly behind raising the minimum wage to $12 an hour by 2020 and we expect to be paying our own employees more than that by 2020. In our ten years of operation, we have seen results that show if we pay our staff higher wages, we have a better retention rate and we spend less money on hiring and training so we are able to keep our best employees and keep our high standards of service at the levels our customers expect. In turn, the business makes more money as we have a high number of loyal, repeat customers,” said Jeff Rogoff, co-owner of Sazza, a fast casual restaurant in Greenwood Village. “Even more important, we are giving our staff the ability to efficiently take care of their monthly bills and contribute to Colorado’s booming economy.”

We expect this to be a hard-fought campaign between proponents of Amendment 101 and the Colorado Restaurant Association, but polls say the public strongly supports an increase to something closer to a survivable amount of money for full-time workers to live on. Campaigns like “Fight for 15” from labor unions have raised awareness of the plight of low-wage workers in America, from an inability to provide for themselves and their families to the resulting dependence of full-time working families on government assistance–assistance that carries negative stigma hard-working peeple do not deserve.

On the other hand, you might have to pay a bit more for your Big Mac. So there’s that.