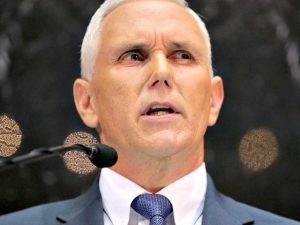 Republican vice presidential candidate and Indiana Gov. Mike Pence is in Colorado campaigning today, and not surprisingly drawing a sharp rebuke from Hillary Clinton’s campaign surrogates, and pro-choice and Latino advocacy groups upset about both Pence’s record on these issues as well as (obviously) his running mate Donald Trump.

Clinton’s campaign released this statement from a Gold Star family rebuking Trump over his recent public spat with another dead serviceman’s family:

“As a Gold Star family, we understand first-hand the loss of a loved one, so to see a candidate for president go after a family who has made the ultimate sacrifice is not only worrisome, it is downright offensive. Every day, young men and women risk their lives to protect the freedoms we cherish and when they pass away, they should be remembered with honor, not insult. That’s why today we ask Mike Pence to denounce Donald Trump’s statements during his visit to our state.”

“As the VP nominee on the Make Misogyny Great Again ticket, I’d like to welcome Governor Mike Pence to our proudly pro-choice state. Colorado was the first state to legalize abortion, in 1967, six years before Roe v. Wade recognized the Constitutional right to choose an abortion. In the nearly 50 years since, Coloradans have said over and over again that the right to privacy and the right to choose an abortion must be respected and protected. These beliefs are fundamental to our Colorado values.

But Mike Pence doesn’t respect our rights. While Donald Trump has only hypothesized that women should be punished for having abortions, Governor Pence has turned this theory into law. Governor Pence is a man who has worked to make abortion illegal, imprison doctors for providing abortion services for women, and ban some of the most common forms of contraception.

Governor Pence is on the wrong side of Colorado voters and values. So are any candidates and legislators who support the Trump-Pence ticket. And we will let Colorado voters know who stands with them this fall.”

America’s greatness has long been measured by the compassion we show others and the Trump/Pence vision for our country will do nothing to move this country forward.

No word yet about Pence attacking local public safety workers or Gold Star families. In fact if Pence says or does anything more noteworthy than these blistering statements he earned just by setting foot in Colorado, we’ll be sure to update.