Get More Smarter on Monday (August 1)

Happy Birthday, Colorado; if you’re feeling old today, talk to Wayne Williams and he’ll help you shave a few years off of your total. It’s time to Get More Smarter with Colorado Pols. If you think we missed something important, please include the link in the comments below (here’s a good example). If you are more of a visual learner, check out The Get More Smarter Show.

► Colorado is still recovering after a Friday visit from Republican Presidential candidate Donald Trump. As Ernest Luning reports for the Colorado Statesman, Colorado Republicans were effusive in their praise for His Hairness…including state Sen. Laura Woods (R-Arvada):

“I am not considering running away from him,” Woods said. “He is the people’s candidate. [Pols emphasis] The people have spoken across this country — 14 million voters. I heard the other day that 86 percent of Republicans say they will vote for Donald Trump. That doesn’t say to me I should run away from him. Why would I do that?”

“The people’s candidate?” The weirdest comment from the Trump events, as reported by Luning, probably comes from Republican Congressional candidate Casper Stockham (the GOP’s 2016 sacrificial lamb in Denver):

When he had the opportunity to shake hands with Trump after his Denver speech, Stockham said he told the candidate about his 86-year-old mother.

“She voted for Obama twice, and she’s voting for Trump, she loves Trump,” he said. “Trump gave me an autographed note to give to her. Racists don’t do that, you know what I’m saying?”

And there you have it: Racists do not autograph notes for elderly black women.

Joey Bunch of the Denver Post has more from Trumpalooza on Friday.

► Elsewhere in Trump news, Chris Cillizza of “The Fix” is perplexed at the “strategy” behind attacking Khzir and Ghazala Khan, the parents of a Muslim-American solider killed in Iraq in 2004:

For the life of me, I can’t figure out what Trump is doing here — and whether there is absolutely any strategy behind it.

Going back and forth with a family who has lost a son in combat is, on its face, the height of stupidity, politically speaking. [Pols emphasis] Even if you don’t agree with the Khans’s view of Trump, it’s hard to feel anything but sympathy for their loss. Losing a child is every parent’s nightmare — and that is a feeling that transcends politics.

As has been mentioned time and again over the last 72 hours, George W. Bush’s response to Cindy Sheehan, who lost her son in Iraq and then camped in front of Bush’s Texas ranch to protest his policies, seems to be the appropriate one for a politician dealing with such a difficult situation.

You know things are bad when you manage to make George W. Bush look like the “compassionate conservative” he once claimed to represent. Today is “Day Four” of Trump’s verbal beef with the Khan family.

► Congressman Mike Coffman is trying really, really, really hard to convince voters that might oppose Donald Trump as the Republican nominee for President. What Coffman won’t do is answer the only question that really matters here: Will you vote for Trump? 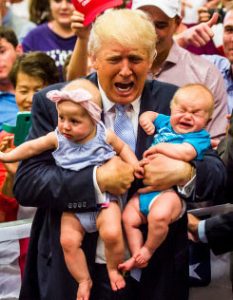 ► Kudos to Colorado Springs Fire Marshal Brett Lacey, who shrugged off criticism from Donald Trump that supporters were kept out of an event on Friday for any other reason other than safety. From the Denver Post:

“There’s an old adage that when a fire marshal walks into a room, milk curdles. So because we’re always looking out for public safety and trying to make certain venues go off successfully and safely sometimes there are people that aren’t very happy with some of the rules and regulations we’re required to enforce. But it doesn’t bother me at all,” he told the TV station.

Criticizing the fire marshal on Friday, Trump said he didn’t know what he was doing and was “probably a Democrat.”

Lacey, was recently honored by the city as “Civilian of the Year” for his role in helping the wounded at a 2015 mass shooting at a local Planned Parenthood.

Perhaps the Colorado Springs Fire Department should have just left Trump inside that malfunctioning elevator.

► Okay, time to start looking over that school supply list. Pencils? Check. Notebooks? Check. Bullets? At least you’re not in Texas, as the Washington Post reports:

On Monday, survivors will attend the unveiling of a memorial on the 50th anniversary of [Charles] Whitman’s rampage, which left 17 dead and more than 30 wounded. That same day, Texas becomes the nation’s eighth state to allow students to brings guns onto university campuses and, in some cases, into classrooms and dorms.

The extraordinary timing of the new law, which permits only concealed weapons, distresses gun-control supporters and survivors of Whitman’s attack. Gun rights advocates are delighted. In their push to expand campus-carry laws across the country, they have cited the impromptu cavalry that took on Whitman as evidence that armed law-abiding citizens are the best defense against mass shooters.

► Democratic Presidential candidate Hillary Clinton will be in Adams County on Wednesday, with running mate Tim Kaine at her side, to discuss her plans for job creation and economic improvement. From the Denver Post:

She will “discuss her plan to create an economy that works for everyone, not just those at the top, including passing the largest investment in job creation since World War II,” according to a news release.

► It was a busy weekend in Colorado Springs for Republicans, where a super-secret Koch Brothers event at the Broadmoor Hotel shared oxygen with the Trump event. As Denver7 reports, both the Kochs and the Trump campaign are adamant in their dislike of one another. Here’s more from the Denver Business Journal:

In a scenario something like the lead-up to a high school prom, Donald Trumpand the billionaire businessmen and political activist Koch brothers are trading barbs as to who jilted the other for a potential date in Colorado.

Charles and David Koch of Wichita, Kansas-based Koch Industries, the funders of many conservative causes and candidates, kicked off a three-day summit Saturday at Denver investor Philip Anschutz‘s Broadmoor resort in Colorado Springs for some 400 right-wing donors to political causes. Time magazine reports that those in attendance agreed to pony up at least $100,000 for Koch-backed causes.

According to Politico, top backers of Republican presidential candidate Trump — who on Friday made campaign appearances in Colorado Springs and Denver— tried to arrange a meeting between Trump and the Kochs in Colorado, but were rejected.

The Koch brothers say that they never invited Trump to any sort of meeting, while Trump claims that he turned them down.

► Control over the University of Colorado Board of Regents may hinge on an at-large race that features former Democratic state Rep. Alice Madden.

► The Republican National Convention in Cleveland two weeks ago may have seriously damaged the Republican brand — and Presidential candidate Donald Trump. From Politico:

While 36 percent of adults are more likely to support Trump coming out of the RNC, 51 percent are less likely to vote for the real estate mogul after the GOP’s four-day event. The -15 net rating is the worst mark for the Republican nominee coming out of the convention since Gallup began asking the question in 1984, though the 1984 and 1992 GOP conventions were excluded.

Last month’s Republican convention, however, is the only time respondents were overall less likely to vote for the candidate who was nominated. Previous lows for the Republican nominee were +2 with Mitt Romney in 2012 and +3 with President George W. Bush in 2004.

The convention has also shaped the views of the Republican Party. Fifty-two percent of those surveyed said they have a less favorable view of the GOP now, while 35 percent see the party more favorably.

► Just how low can Donald Trump go? Even among Republicans…nobody knows.

► Colorado Democrats are taking advantage of the popular Pokemon Go game to find new voters to add to the registration rolls. Registering voters is probably easier than trying to capture a virtual creature with that little red-and-white ball.

► Yes, there were American flags at the Democratic National Convention in Philadelphia.

► Like it or not, get ready for The Sanchize.