“No matter who you are, no matter where you’re from or how you got here, you are special and your potential is as big as America itself,” Duran said to young people in her speech. “That’s what Hillary Clinton believes. That’s why she’s spent a lifetime fighting for every child.” 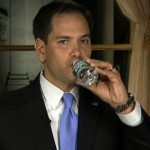 Later in the evening, it was Gov. John Hickenlooper’s turn at the mic to take a surprisingly hard shot at Republican presidential nominee Donald Trump. As the Colorado Springs Gazette’s Megan Schrader reports:

The governor didn’t pause for applause or laughter but plowed right into his plug for Denver’s urban revitalization, which began after Hickenlooper opened the Wynkoop Brewing Co. in an abandoned warehouse district nearly 30 years ago.

“More entrepreneurs arrived and the neighborhood took off and so did Denver,” Hickenlooper said. “As Hillary Clinton says, ‘it takes a village’ … she understands that even in Colorado, land of rugged individualism, our economy is stronger together.”

Unvarnished reviews of both speeches we’ve heard have been quite positive. It’s clear that Hickenlooper was nervous about his prime-time speaking slot, but he delivered a strong if a bit dry-mouthed five minutes of solid support for the Democratic nominee–with a few great quotables like “my businesses didn’t go bankrupt six times.” Tim Kaine, who narrowly bested Hickenlooper for the vice presidential nomination, is obviously a more comfortable speaker and attack dog, but Hick didn’t disappoint. Those couple of times we were sure his voice was going to crack, it didn’t.

All told, not too shabby for our little flyover state this convention season! If only Darryl Glenn had gotten some face time.