The Trump Campaign is STILL Talking About Melania’s Plagiarism 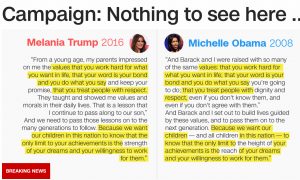 Plagiarism comparisons were front-page news on CNN.com on Tuesday.

The big story from Monday night at the Republican National Convention in Cleveland was the allegations of plagiarism in a speech delivered by Melania Trump, the wife of GOP Presidential nominee Donald Trump. Various Trump spokespersons spent the next 36 hours trying to downplay the fairly indisputable evidence of plagiarism, much to the confusion of politicos on both sides of the aisle.

Today, after blaming everyone from Hillary Clinton to My Little Pony for the plagiarism story, the Trump campaign finally came clean…sort of. As Chris Cillizza writes for “The Fix”:

A day-and-a-half removed from revelations that Melania Trump, the GOP nominee’s wife, had plagiarized portions of the speech she delivered Monday night to the convention crowd, the Trump campaign offered up an answer that made sense.

Meredith McIver, an employee of Donald Trump’s company (not campaign) had accidentally used first lady Michelle Obama’s words from a 2008 speech at the Democratic National Convention. Melania Trump had read McIver passages of Obama’s speeches that she liked, and McIver jotted them down without realizing they belonged to the first lady. (McIver’s full letter is here.)…

…The smart thing to do — and the thing that any even marginally traditional campaign would have done — is rapidly figure out that the blame lies with McIver, release this letter overnight Monday and cast the whole thing as an innocent mistake by a longtime loyalist who was simply trying to help her friend Melania Trump.

That approach wouldn’t have squashed the story entirely on Tuesday. But it would have taken a whole lot of oxygen out of it. By Tuesday night — and certainly by Wednesday morning — the talk of the town would have been Donald Trump Jr.’s terrific speech Tuesday night and how momentum was building to Ted Cruz and Mike Pence Wednesday night.

Instead, for some unknown reason, the Trump campaign spent all of Tuesday defending a position that they knew they could never hold.  And then they gave up on it. Inevitably.

Maybe it’s not such a good idea for the Trump campaign to operate without a clear campaign manager or a group of seasoned communications experts.