Hick For Veep After All? 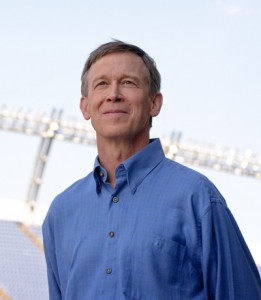 You’d better pay attention to what the AP is reporting via the Colorado Statesman this weekend:

Hillary Clinton summoned contenders to become her running mate to her Washington home on Friday as she closes in on a pick for vice president.

A person familiar with the process said Clinton also met with Housing and Urban Development Secretary Julian Castro at her home. The person would only speak on condition of anonymity to discuss the private meeting.

The meetings came a day after the presumptive Democratic presidential nominee campaigned alongside another contender, Virginia Sen. Tim Kaine, in northern Virginia.

According to sources, Hickenlooper met with Clinton for more than two hours. Hickenlooper arrived at approximately 4 p.m. and separated after 6:30 p.m.

It’s been long suspected that Gov. John Hickenlooper of Colorado would likely take a Cabinet post in Hillary Clinton’s administration, and his name has appeared on some–though not all–speculative lists of who she might select for vice president. As a popular Western governor with a generally progressive record (excepting his famous weak spot on energy issues), and also with a good reputation for engagement across the aisle, Hickenlooper has plenty to offer this ticket.

Which is certainly not to say that other candidates such as Massachusetts Sen. Elizabeth Warren HUD Secretary Julian Castro are in any way less qualified. Obviously, the Clinton campaign has many factors to weigh in this selection, and reader opinions are likely to be…diverse on where Colorado’s governor lands in that process. One other point for locals to keep in mind is that in the event of Hickenlooper ascending to the vice-presidency Colorado would swear in our first woman governor: Donna Lynne.

Needless to say, we’ll be watching this very, very closely over the next few days.