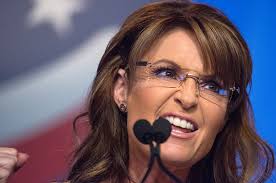 Doty made the comments to KNUS 710-AM’s Julie Hayden, who bumped into Doty at the Western Conservative Summit in Denver July 2.

“I thought Sarah Palin was right on, just spot on!” Doty told Hayden when asked for her “thoughts” on the speeches. “She was very, very good – brought a clear message that people need to get on board.  And I really enjoyed hearing [Donald] Trump.”

Given that she’s a reporter for Fox 31 Denver, Hayden knows that people want more details about Doty’s assessment of Palin. “Spot on” is exuberant and laudatory, but what really stood out for Doty, beyond the message to get on the Trump train? And what did Doty “really” enjoy about hearing Trump?

Palin’s speech amounted to a semi-understandable endorsement of Trump. So it’s not surprising that Doty, who’s said she’ll back Trump, would like it.

But Palin went beyond expressing support for Trump. She raved about him.

She derisively referred to Republicans who oppose Trump, the #NeverTrump people, as RATs (Republicans Against Trump).

If you look at the folks who vote in Doty’s district, you have to think Doty needs to win over a lot of ticket-splitting RATs to defeat Kagan. Is Doty worried about offending these voters by, well, saying it’s spot on for Palin to call them vermin?

Then there was the part of Palin’s speech when she said Trump “really connects.” “We found a messenger!” said Palin.

That’s “spot on” only if you’re not a woman, not a Hispanic, not African-American, or not just about everybody.

It’s spot-on true, as Palin said, that Trump is a messenger for the Tea Party.

Trump, Palin said, is the standard bearer for a “grassroots, populist movement that’s fertilized by the still passionate Tea Party, in all its glorious independence.”

Does Doty think the Tea Party is spot-on in its “glorious independence,” as in shutting down the federal government, denying global warming, blocking bipartisan immigration reform, etc?

And I haven’t even touched on why Doty “really enjoyed” hearing Trump.

Lots for Hayden dig into during her next interview with Doty.