Trump Supporter Who Poisoned Groundwater Places Trump Billboards on I76

The plains roll on for hundreds of miles  under blank blue skies near Roggen, Colorado. Sage, scrub grass, fracking tanks, and a few cattle dot the vast landscape.  Roggen itself is a ghost of its former prosperity – the town consists of a grain elevator, a telephone co-op,  two churches, a convenience store, and a post office.

Yet, Roggen boasts two new roadside attractions: gigantic “Trump for President” billboards facing west and east, placed to catch the eyes of all travelers along I76.

I wanted to find out who felt strongly enough about Mr. Trump’s candidacy to build, paint, and place these monumental political advertisements in this desolate area. I investigated, and found a family saga rooted in the heyday of Colorado political journalism, in the gas and oil boom years, including rodeo circuit stardom and family tragedy, and the criminal indictment and sentencing of the landowner, Mr. Mike Cervi, for violating the Safe Water Act by injecting petroleum wastes into the High Plains / Ogalalla Aquifer from 2001 – 2002.

Eugene Cervi produced and edited Cervi’s Rocky Mountain Business Journal in Denver from 1954 until his death in 1970.   Cervi’s Journal later became the Denver Business Journal. “Gene” and his daughter, editor Cle Symons Cervi, were both inducted into the Denver Press Club Hall of Fame.   Gene Cervi was twice Chair of the Colorado Democratic Party, although he was critical of JFK. Later in his career, the “Journal” became more conservative and more pro-business in viewpoint. 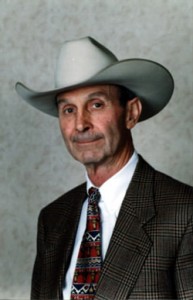 Mike Cervi, Sr., inducted into ProRodeo Hall of Fame in 2003

The Cervis raised their family in Denver, and attended the Denver Stock shows. Mike Cervi, Sr., born in 1936, became fascinated with the rodeo clowns. When the family inherited a ranch in Sterling, Mike realized his dream of building a cattle and rodeo empire. Today, the 80 year old Mike, his wife, Nancy, and the entire Cervi family are deeply involved in the rodeo business. Michael Cervi, Jr, (1971-2001) . was a promising young rodeo roping star, but died tragically in an airplane crash in 2001.

Michael Cervi, Sr. was the second largest landowner in Weld County in 2001, owning 28,000 acres.  There are still 200 property records under the name of Cervi in Weld County, according to the County Assessor’s office. This includes records under the names of Mike Cervi, Cervi Enterprises, LLC, and various other Cervi family members. Cervi Enterprises, LLC, the umbrella company for 7 land,  rodeo, cattle, and gas and oil extraction businesses, owns the parcels next to I76, which feature the Trump signs. Mike Cervi, Sr. is the CEO of Cervi Enterprises.

These maps, showing Cervi Enterprises ownership of the land by I76, are  from pages 108 and 109 of the Weld County Ownership Mapbook.

Weld County has been producing oil and gas for almost 50 years.  When Mike Cervi, Sr., moved to Weld County, he put in oil wells on his property. There are still 27 oil or gas wells on Cervi land. But, in 2001 – 2002, at least one of his wells southeast of LaSalle, CO was leaking into  groundwater (the Ogallala / High Plains aquifer). This was a problem which Mike Cervi, Sr “solved” by faking the data on the monitoring of the well. Per  Water Webster:

Cervi, who pleaded guilty to a felony violation of the U.S. Safe Drinking Water Act, owned a business called Envirocycle, according to court documents, which had a state permit to inject wastewater from oil drilling into a deep underground aquifer through a commercial injection well. Cervi’s plea agreement said he had his employees hide a leak from the well by sealing off the leaky well from the monitoring system, creating a new fake sampling point, periodically pouring clean water in the sampling tube, submitting the clean samples to the Weld County Health Department, and making false log entries about the amount of fluid in the well. By doing so, the well continued leaking contaminants into the soil. Rocky Mountain News_ 9/10/05

The Greeley Tribune also reported on the violation, guilty plea and Cervi’s sentence. Cervi ultimately paid over $250,000 for cleanup costs, and served five months in Federal prison in 2005. The EPA  commented on the case, “ Allowing toxic chemicals to leak from injection wells can create a health hazard for both humans and wildlife.”

Why am I drilling into old Weld County history and injecting it into the current political debate?