Laura Woods and her friends are lying to you

I live just down the road from you here in Colorado’s Senate District 19. You may not know it but we live in one of the most important and competitive state senate districts in all of Colorado. 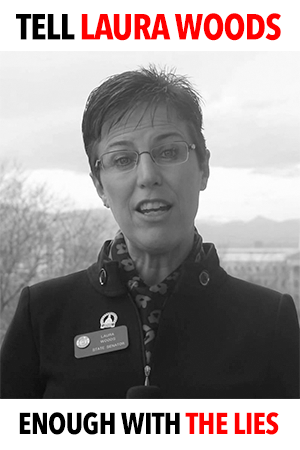 That’s why the negative campaign lies are already flying fast here in Arvada and Westminster. Supporters of Laura Woods, the far-right radical activist who barely won control of the senate seat in 2014, are pushing completely false claims about Woods’ progressive opponent–claims that were in fact debunked years ago. [1] It’s against the law to make blatantly false statements in a political campaign in Colorado, but Woods’ supporters apparently don’t care.

Send a message to Laura Woods right now: tell her to put a stop to the lies her friends are telling about Rachel Zenzinger.

The truth is, Laura Woods is one of Colorado’s most wildly out-of-touch lawmakers. Woods has no business representing the moderate middle-class families of this district. Woods is an “anti-vaxxer” extremist who vigorously fought against any attempt to improve Colorado’s dismal vaccination rates for school-age children. Woods is a pro-gun radical who opposes background checks on gun sales–checks that have stopped thousands of criminals from buying guns. And Woods is trying to impose her values on Colorado and prevent all women from getting an abortion, even in cases of rape or incest.

The reason Laura Woods and her friends are telling blatant lies about Rachel Zenzinger is simple: they don’t want to talk about Woods’ disastrous record in the Colorado Senate. In 2014, a right-wing “wave year,” Woods won this seat by fewer than 700 votes. In 2016, Woods is considered the most vulnerable lawmaker in the Colorado legislature. And with your help, we’re coming for her.

Tell Laura Woods and her friends that you’re not buying the lies. We’ll make sure she gets the message.

Thanks for standing up for honesty in our elections. It matters now more than ever.