(Yeesh, another one? Here? Seriously? – Promoted by Colorado Pols) 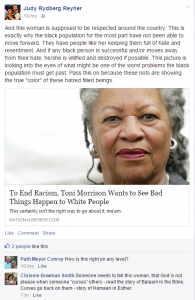 Otero County Republican chair Judy Rydberg Reyher says there’s no intended racism in her Facebook posts that appear to make sweeping unfavorable comments about African Americans, including, among other things, that African Americans are “hatred-filled beings” who are kept full of  “hate and resentment” by people like author Toni Morrison.

In one of the ten posts (see below and right), Reyher shared a National Review article last April about Toni Morrison:

Reyher’s comment: “And this woman is supposed to be respected around the country. This is exactly why the black population for the most part have not been able to move forward. They have people like her keeping them full of hate and resentment. And if any black person is successful and/or moves away from their hate, he/she is vilified and destroyed if possible. This picture is looking into the eyes of what might be one of the worst problems the black population must get past. Pass this on because these riots are showing the true ‘color’ of these hatred filled beings.” [BigMedia emphasis]

Reyher said: “There’s a lot of white people that have that same, I don’t know what you’d call it, victimhood embedded into them. ‘It’s not my fault I’m this way. It’s because a teacher was mean to me or they didn’t like me when I was in school.’ And I get really tired of it. And with blacks, it’s become an industry keeping them stirred up, keeping them angry.

“I meant that as a slam on any color group that plays the victim card.” 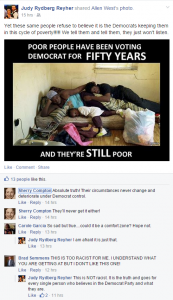 Reyher wrote: “Yet these same people refuse to believe it is the Democrats keeping them in this cycle of poverty!!!!! We tell them, they just won’t listen.”

One Facebook commenter wrote, “So sad but true….could it be a comfort zone? Hope not.”

Reyher replied, “I am afraid it is just that.”

Another commenter wrote that Reyher’s post is “too racist for me.”

“This is NOT racist. It is the truth and goes for every single person who believes in the Democrat Party and what they are.”

Asked about the post, Reyher, who’s from southwest Colorado, said:

Reyher: “I believe that to the core. If I offended somebody, I hope to hell I offended them to the point where they say, ‘Maybe so,’ because they have to be offended into reality somehow.”

But she doesn’t see this as a specific problem of African Americans.

“I don’t think there is a single race that can be singled out,” she told me.

Reyher: “Nothing has been more destructive to the human population and human ambition than the war on poverty, because what it does is it makes those people think—In New Orleans, when they had the darn hurricane, instead of them helping themselves, they waited. Some of them sat. A year later, they took a film crew around, and some of them still had the same debris in their yard, and they were waiting for somebody to help them, because some Democrat told them they would. It has nothing to do with race. This victimhood has nothing to do with race. Look at the women who feel like victims, and there’s nothing they can do. The victim card is easy to play. It’s hard to win with a victim card.”

Reyher told me she no longer agrees with a Facebook post she shared indicating that Obama favors African Americans.

“I don’t know that he dislikes whites any more than anybody else,” she said.

Asked about a post depicting Obama as a “Muslim brother,” Reyher said she does not think Obama is a Christian but is not sure he’s Muslim.

In another post, Reyher calls Michelle Obama “evil personified” and “one of the biggest racists ever to live.”

Last month, Delta County GOP Chair Linda Sorenson told me she didn’t care if people were offended by her shared Facebook post depicting Obama as a chimpanzee. Later, she apologized if her post offended people. 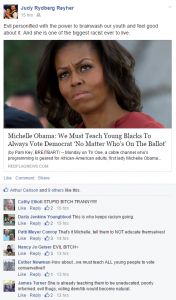 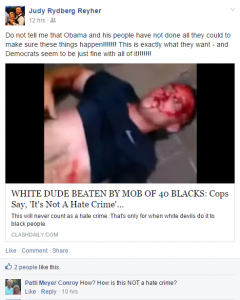 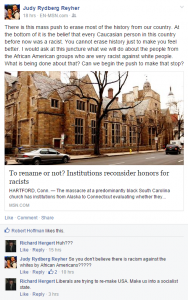 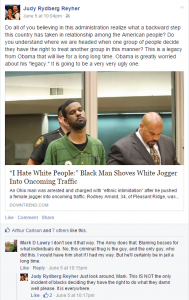 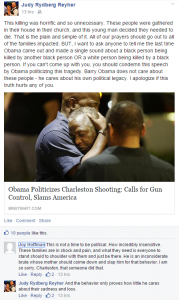 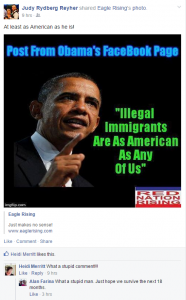 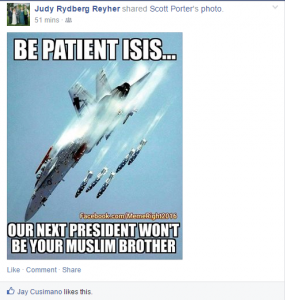