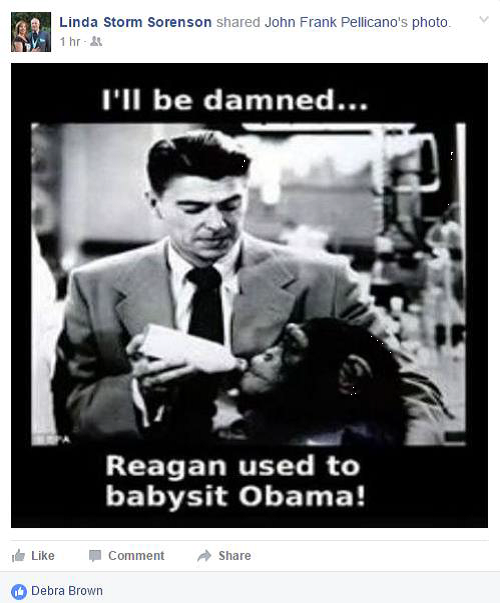 A press release we just received from NAACP’s Colorado Wyoming Montana State Conference calls for the immediate resignation of Delta County Republican Party chairwoman Linda Sorenson, who is facing growing condemnation after her office denied racist Facebook postings she had previously admitted to:

“There is no room in Colorado politics for the kind of blatant racism expressed by the chair of the Delta County Republican Party,” said Rosemary Lytle, President of the NAACP CO MT WY State Conference. “Linda Sorenson admitted what she did, and said she didn’t care who it offended. Now that it has made national news, her subordinates claim her account was ‘hacked?’ It’s insulting, not only to the President but to those she serves in Delta County and even to the entire state of Colorado.”

“We cannot stand by and allow political leaders in America to continue to reflexively slide back into the ugly racial politics we have fought for decades to escape,” said Lytle.

“We are asking for Linda Sorenson’s immediate resignation as Delta County Republican Party chairwoman,” said State Representative Angela Williams. “Every Republican in America, and especially here in Colorado, has an obligation to condemn Sorenson’s unapologetic racism.“

“This isn’t the Mississippi Delta,” said Williams. “Delta County Colorado is no place for racism–and blatant disrespect of our Commander in Chief. And frankly there should be NO place in Colorado politics for this kind of behavior.”

From the letter sent to Sorenson today:

This brazenly racist outburst from a Republican Party official cannot go unanswered. Since President Obama won the election in 2008, and as President of the United States, a steady barrage of racist insults and epithets against our nation’s first African-American president has shocked the nation’s conscience. We cannot stand by and allow political leaders in America to slide back into the ugly racial politics we fought for decades to escape…

Because of Linda Sorenson’s racist actions, and especially after compounding her actions with dishonesty, we ask for her immediate resignation as Delta County Republican Party chairwoman. We further request that Colorado Republicans at every level of elected office, including Delta County’s representative in Congress Rep. Scott Tipton, immediately condemn Sorenson’s actions–or explain why they refuse to do so.

This is more than just about racism. This is about the political right’s perpetual lack of civility. Rather than reaching out to diverse communities, Delta County Republicans are telling people of color that their party doesn’t value them. Delta County Republicans need inclusion training, and the NAACP is prepared to provide that training on request.

As leaders in the legislature and in communities across the state, we have an obligation to ensure that Sorenson’s racist actions do not tarnish the reputation of all Coloradans. We ask every Colorado Republican to join us in standing up against racism: or face the consequences this November if they will not.

And with that, the next move is Sorenson’s–and everyone who stands with her in solidarity or silence.