Who is Scott Tipton working for? Not you 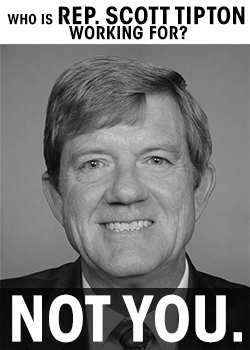 This weekend, a devastating report in the Denver Post confirmed something many in western Colorado already knew: Rep. Scott Tipton is the tool of an oil and gas company that has given his campaign tens of thousands of dollars. Tipton takes his orders from the energy industry–not the citizens he represents in Congress.

The Denver Post reported this weekend that Rep. Scott Tipton introduced legislation regarding a controversial energy development issue in western Colorado which “was written largely by an energy company that is also Tipton’s largest campaign contributor.” [1] The bill leaves out any plan for long-term conservation in the Thompson Divide area. The Post reports that Rep. Tipton admits to taking language for the legislation “word-for-word” from lawyers for the energy company that owns mineral rights in the Thompson Divide.

And it’s the same energy company, SG Interests, that has given almost $40,000 to Rep. Tipton’s campaign. Ordinary citizens in Tipton’s district can’t compete with the industry’s lavish support for Tipton, and the results are obvious. Western Colorado’s representative in Congress answers to the highest bidder.

Send a message to Tipton now: tell him to return SG Interests’ money, and stop letting the oil and gas industry write “his” legislation. We’ll make sure Tipton gets the message.

Thanks for standing up for western Colorado when it matters most.