Ethics or Karma Catch up to Kevin McCasky 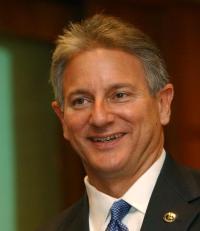 McCasky had an ethically-questionable tenure in Jefferson County government. His departure from the Board of Commissioners was quintessential McCasky: On the way out the door, he left Jefferson County with (another) ethics complaint over his role in convincing the county to write a big check to the organization that he was leaving to direct (that ethics complaint was ultimately confirmed several years later).

As the Columbine Courier reports, McCasky’s shady past may have finally caught up to him:

An executive board member of the Jeffco Economic Development Corp. said simultaneous resignations of three high-level staffers were part of a restructuring.

Rob Osborn, a past chair of the EDC’s board of directors, said the departures of president and CEO Kevin McCasky, executive vice president Doug Bene and investor relations manager Lilly Daniels mark the first step in a downsizing of the Golden-based organization.

There’s another story here — the one you can easily read between the lines:

When asked whether funding partners were concerned about the changes, Osborn said most wanted to know how the EDC will move forward.

“Folks just understood that this was the best decision for Kevin (McCasky) at this time,” he said. [Pols emphasis]

The Jeffco EDC, a nonprofit that formerly was called the Jefferson Economic Council, received $300,000 in funding from Jefferson County in 2015, and a $5,000 membership fee from Jeffco Public Schools, according to the school district’s accountability website. It also receives funds from municipal governments in the county….

…McCasky resigned from Jeffco’s county commission in January 2011 to accept the top job at the EDC. The Colorado Independent Ethics Commission later ruled that McCasky violated state ethics laws by voting to approve $400,000 in county funding for the EDC while he was a candidate to become its president.

McCasky did not return calls for comment on this story.

Well, at least Jefferson County was able to continue to pay McCasky’s salary long after he left the government offices. That was nice.