Colorado Republicans Flop Like Fishes As Trump Rolls On

Hair by Donald, head by Coffman.

In the last few days, our local media has turned its attention to the increasingly urgent question of whether local Republicans, from Sen. Cory Gardner all the way down through the ranks of elected officials, would support Donald Trump in the event he wins the Republican nomination for President.

Trump’s insurgent presidential campaign has resulted in perhaps unprecedented division within the Republican Party, even as he rolls to victory after victory in Republican primaries. Certainly Trump’s dominance of the GOP primary so far over the objections of that party’s entire establishment has no precedent we can think of in our lifetimes, and the long-term consequences for that party are difficult to fully comprehend–but very, very significant.

Yesterday, 9NEWS gave us a fairly definitely roundup of Colorado’s federal elected Republicans on the question, with one significant caveat:

None of Colorado’s GOP members of Congress took an anti-Trump stance when asked by 9NEWS whether they would support the billionaire’s insurgent bid for president if he ends up winning the Republican nomination.

National GOP leaders have grown increasingly leery of Trump, with past Republican nominee Mitt Romney going so far as to call the reality-TV star turned politician as a “phony” and a “fraud” who must not become the party’s standard-bearer.

The five Republican members of Congress from Colorado were split along two positions: refusing to answer the hypothetical and saying they would support the eventual GOP nominee.

According to this latest 9NEWS report, Rep. Mike Coffman says he won’t answer a “hypothetical” question since Trump is not yet the nominee. But we’re obliged to note that contradicts what Coffman’s spokesperson told Ernest Luning of the Colorado Statesman in February when asked the same question:

“Will Mike Coffman support the Republican nominee over Bernie or Hillary?” said campaign spokeswoman Kristin Strohm. “The answer is obviously yes. [Pols emphasis] And he believes strongly it is going to be Marco Rubio.”

As of today, the informed speculation is whether Marco Rubio will drop out before the March 15 Florida primary, or after he loses his home state to Trump as all the polls show him destined to do. Rubio’s total collapse in the last couple of weeks should have already made this deflection an unacceptable answer to inquiring reporters. But either way, Coffman’s flopping to and fro the biggest political news story of the year is a story all by itself. 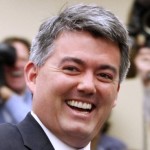 And as 9NEWS continues, surprise! Sen. Cory Gardner is flip-flopping too, after a disastrous interview with the Wall Street Journal last week that became the butt of innumerable weekend jokes:

After being pressed seven times to answer the question by Wall Street Journal, Gardner did say “I will support the Republican nominee” on Friday, saying he didn’t believe Trump would end up with the nomination.

On Monday, Gardner walked that back, telling 9NEWS via email he “will not engage in hypotheticals,” and stating that he believes Marco Rubio is the only person in the race who can prevent Democratic front runner Hillary Clinton from winning the White House.

Gardner’s backpedaling may have something to do with a secretive conference he attended over the weekend at a swanky Georgia resort hosted by the American Enterprise Institute, at which Karl Rove reportedly outlined the GOP establishment’s last-ditch plan to stop Trump. Obviously, if you’re still entertaining any hope of stopping Trump, saying you’re ready to support him if he wins the nomination is not helpful.

Bottom line: if you’re a Republican not on the “Trump Train,” this is a slow-motion train wreck of epic proportions–from which it is not hyperbole to suggest the GOP as we know it may never recover. If you’re a Colorado Democrat, you’re positively gleeful watching this Republican civil war play out, from Donald Trump to Tim Neville.

And it’s only going to get worse/better, folks.