At Least She’s Not Your Governor 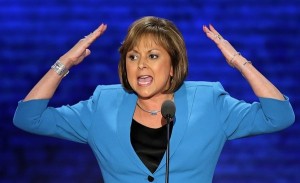 New Mexico Gov. Susana Martinez has had it up to HERE with all of these laws and stuff.

Welcome to another edition of one of the longest-running features here at Colorado Pols: “At Least They’re Not Your Legislator“ (or Governor, or Senator, or whatever).

According to NM Political Report, New Mexico Gov. Susana Martinez — who was just recently chosen by her fellow Governors as the Chairwoman of the Republican Governor’s Association — just can’t seem to keep out of trouble:

NM Political Report obtained audio of three calls to police. One was from the front desk of the hotel, saying those in the room had been warned multiple times and asked for police to come and escort those in the room off the property.

…A front desk staffer called the police after midnight to have the people in the room “escorted off the property.”

“They’ve been warned already and they are still not quieting down,” the staffer told a Santa Fe Police Department dispatcher. “They’ve been told to leave. We were told to call you guys.”

Once the police came to the hotel, the woman identifying herself as the governor talked with police on the phone at least twice.

That sounds like one hell of a “pizza party.” Unfortunately for Gov. Martinez, who has been engulfed in a series of scandals already this year, there is ample audio evidence of complaints about a loud party in her room. Here’s how Martinez responded at one point:

She responds that no one is throwing bottles off the balcony “and if there were, it was about six hours ago.” [Pols emphasis]

The FBI is already investigating a potential campaign finance scam involving Martinez’s closest political advisor, Jay McCleskey, which is a separate investigation from the federal inquiry into allegations that Martinez targeted political enemies for tax audits.

Maybe it’s something in the water in New Mexico. In October, New Mexico’s Secretary of State resigned her post and pled guilty to two felony counts of embezzlement; Republican Dianna Duran had been accused of using taxpayer money to fund her gambling habit at casinos.

It wasn’t long ago that Martinez was being mentioned as a potential Republican candidate for President, or at the very least an attractive option for the eventual GOP nominee to select as a running mate. If Republicans have been maintaining a “short list” of potential candidates for Vice President, we’d guess that Martinez’s name has a big ‘ol line through it.

That might be an unnecessary step, however. Martinez certainly sounds, uh, less than sober in the audio recordings from the hotel incident. Pressuring law enforcement officials to cover up or ignore improprieties might soon put Martinez on the same bus as former SOS Duran.