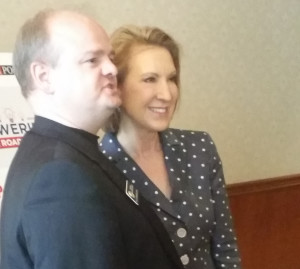 UPDATE: In response to my question of whether he thinks there’s any difference between the Planned Parenthood domestic terrorist and Planned Parenthood executives, Klingenschmitt said via email, “I’ve been consistent in my statements calling for an end to ALL of the violence, not just half of the violence as the pro-abortionists do.  They remain inconsistent in their calls to end some violence, while they engage in violent behavior against children behind closed doors.”

“Listen, the shooter was filled with the demonic spirit of murder,” said State Rep. Gordon Klingenschmitt, a Republican, told Colorado Springs radio station KLZ 560-AM four days after the shooting (at 6:20 below). “And yet, the Planned Parenthood executives who call for not just the murder but the profiting from selling aborted baby parts, as we’ve seen from their own lips on the videos of the Center for Medical Progress over the summer, they have that same demonic spirit of murder.”

Klingenschmitt did not immediately return an email seeking to know if he sees any difference between Planned Parenthood executives and the domestic terrorist.

Klingenschmitt was one of three Republicans, along with Rep. Mike Coffman (R-Aurora) and U.S. Senate candidate Tim Neville, whom pro-choice activists accused last week of inciting clinic violence through their use of “extreme” rhetoric.

“Never have I called for violence. In fact, we abhor the actions of the violent shooter,” Klingenschmitt also said during the radio interview (at 4:25 below).