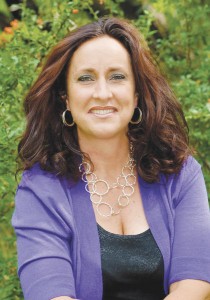 Jeffco School Board candidate Regan Benson may not live anywhere near the district.

There was an interesting story in the Columbine Courier on Wednesday that you definitely need to read — particularly if you are a Jefferson County Voter.

Republican Regan Benson is running for a seat on the Jefferson County School Board in District 5. If School Board President Ken Witt is forced out in the recall election, Benson could end up being his replacement in District 5. This could lead to even more drama in Jeffco School Board politics, because it appears likely that Benson actually lives about 150 miles away — in Akron, Colorado.

As Doug Bell reports for the Courier:

Benson has not directly responded to repeated questions about whether she lives in Jefferson County. She told Evergreen Newspapers in 2012 that her family had moved to Akron, a town in eastern Colorado, in part because of dissatisfaction with the Jeffco school district. Since declaring her candidacy, however, Benson has said only that she is still a registered Jeffco voter in District 5.

“I don’t believe it prudent to the issues of running for a local school board position to publish my address,” Benson said. [Pols emphasis]

Beth Clippinger, assistant to Jeffco Clerk Faye Griffin, said state statute requires school board candidates to be registered voters for 12 consecutive months before the election, and that Benson registered as a Jeffco voter in November 2013. 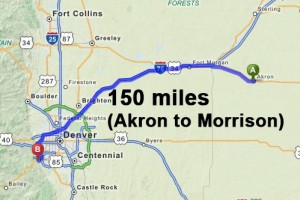 Regan Benson could have one hell of a commute if she is elected to the Jeffco School Board.

It may not be particularly relevant to publish Benson’s exact address(es), but it is certainly worth noting if she doesn’t live anywhere near Jefferson County, which appears likely. Benson apparently answered questions from the Columbine Courier via email — the story notes that she declined a telephone interview — and says that she decided to run for Jeffco School Board even though she opposes the recall effort.

While we can’t say for sure where Benson might rest her head at night, voter registration information is a matter of public record and fairly easy to check. Benson is a registered Jefferson County voter with an address in Morrison (Willow Springs), but her voter registration record also lists an address in Akron, Colorado — about 150 miles to the east. When there are two separate residences listed for a particular voter, it usually means that the second address is the destination for mail ballots.

Benson probably collects her mail ballot in Akron, and she refuses to say if she actually lives in Jefferson County, which is a weird thing to do if she really does live in Jeffco — what would be the point of dodging that question otherwise? And then there’s this:

Benson, who said she has never before run for office, said all three of her sons have in the past attended Jeffco schools, although her youngest son now attends school in another district.

The law doesn’t mandate that Benson actually live in Jefferson County so long as her voter registration is there, but why would you want to run for a school board position in an area that is 150 miles from your home? Jeffco has seen Republican candidates for school board in prior years who home-school their children, so it wouldn’t be new for someone to seek a Board spot with no obvious connection to the school district. But this — well, we’ve got to admit that we’ve never seen this before.