As the Grand Junction Sentinel’s Charles Ashby reports–a new proposal to transfer foreign combatants presently being held under dubious legal circumstances from the U.S. Navy base at Guantanamo Bay, Cuba to Colorado’s Florence “Supermax” ultra-secure federal prison, which was floated previously as President Barack Obama has tried to find a way to close the Guantanamo Bay’s controversial detention center, is meeting fierce resistance once again from Republican lawmakers in our state:

“The war on terror hasn’t been won,” he said in an interview. “This is not a criminal. This is a terrorist. This is somebody who has declared war on the United States of America, and I think the appropriate response is to leave that in the control of the military. Keep (Guantanamo Bay) open.”

Tipton, however, expects President Barack Obama to “do whatever he wants,” but urged him to listen to Congress and keep the prisoners where they are.

Gardner also called on the White House not to close the military prison.

“The Guantanamo facility houses some of the world’s worst international terrorists, and it’s critical that we keep them there,” he said in a statement. “That this reckless and irresponsible idea is being considered at all by officials in the Obama administration shows a careless disregard for the safety and security of Coloradans.” 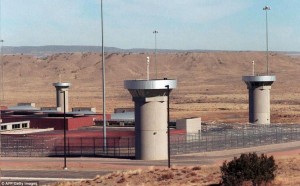 But as the Denver Post’s editorial board replied yesterday, that’s a bunch of fearmongering claptrap:

If that’s the case, then we’d better go home and bolt the doors, because the worst of the worst are mostly already here. Among them:

Ramzi Yousef and four other al-Qaeda operatives convicted in the 1993 World Trade Center bombing; Terry Nichols of the Oklahoma City bombing; Unabomber Ted Kaczynski; and Zacarias Moussaoui, convicted as part of the 9/11 conspiracy.

Oh, and did we mention al-Qaeda operatives involved in the U.S. embassy bombings in Africa?

As host to the nation’s most secure federal prison, affectionately known as the “Alcatraz of the Rockies,” Colorado already has the nation’s biggest, and maybe the world’s biggest after Guantanamo itself, population of internationally-recognized high profile terrorists–including high profile members of Al Qaeda and a 9/11 conspirator. Back in 2009, when President Obama was first looking to close Guantanamo’s detention center, then-Gov. Bill Ritter was heavily criticized by local Republicans, including then-state Rep. Cory Gardner, for saying he would not oppose the transfer of Guantanamo Bay inmates to Colorado. Gardner infamously warned of a “pipeline of terror from Kabul to Colorado,” a preview of the kind of scare-tactic rhetoric he has frequently employed since then as he pursued higher office.

The real problem, both in 2009 and today, is one that the Denver Post only indirectly references in their editorial:

We don’t think Florence is the best location, either, but not because terrorists don’t belong there. Convicted terrorists absolutely belong there, and are there. But the Guantanamo detainees are enemy combatants. They aren’t convicted [Pols emphasis] and, if they can’t be released to another country, they should be housed at a military prison on the mainland…

The biggest problem with the inmates at the Guantanamo Bay detention center is, of course, their extralegal status. Because most detainees at Gitmo have not been convicted of a crime, with many being cases that cannot be tried under American criminal law due to jurisidictional problems or circumstances of their legally questionable detention, transferring them to the United States could become highly problematic–especially for American politicians who have essentially argued for over a decade that Gitmo detainees have no legal rights.

Once you realize that the fear being blown up our collective kazoos by Sen. Cory Gardner and Rep. Scott Tipton has no rational basis, these much less savory motives become easy to see. It’s quite possible that there won’t be a solution to the Gitmo detainee question during Obama’s presidency, or even while Republicans remain in control of Congress.

But history is going to judge this someday, folks. And history won’t be kind to the fearmongers.