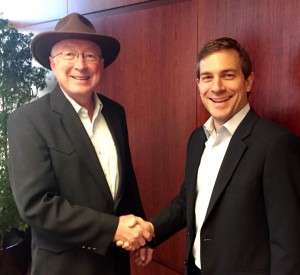 Former U.S. Senator and Secretary of the Interior Ken Salazar certainly isn’t shying away from getting involved in Colorado political races. Long-rumored to be preparing for a run for Governor in 2018, Salazar has nevertheless taken sides in a handful of high-profile Democratic Primary races in 2016.

The latest Democrat to earn Salazar’s support is Jeff Bridges, one of two candidates running for the open seat in HD-3 (South Denver).

Here’s what Salazar had to say about Bridges in a press release from the campaign:

I am proud today to endorse my good friend Jeff Bridges for the Colorado State House of Representatives. In his work for me in the United States Senate, he showed time and again his ability to work across party lines for the benefit of all Coloradans. Jeff is like family to me, and I know he will bring his deep Colorado values with him into the state legislature.

While Jeff was working for me in the U.S. Senate, I received a letter from an Army Specialist from Colorado serving in Iraq. The letter read:

“Two days ago a good friend of mine was killed in action when an Improvised Explosive Device (IED) detonated next to his Humvee. He was sitting in the gunner seat and pulling rear security. I have seen automated guns that can go on the top of these same Humvees. These guns are controlled from inside the vehicle. Why are these guns not on every Humvee?… If the answer is money, then I would really like to know how much my friend’s life was worth.”

Since Jeff worked as my aide on military issues, I gave the letter to Jeff and on my behalf he looked into the situation. The commanders Jeff spoke with in Iraq raved about the program. Congress, however, was in the process of eliminating it. Jeff organized a successful, bipartisan effort to save the program that included the top Democrat and Republican on the Defense Subcommittee on Appropriations and members of the Senate Armed Services Committee from both sides of the aisle.

When we first received that letter from a Coloradan serving in Iraq, only a few of these systems were operational. Jeff’s work secured full funding for 1,000 more, and today there are thousands of these systems saving the lives of our soldiers overseas.

This is just one of many stories I could tell about the great work Jeff did on my behalf in the U.S. Senate. I know he will make the best representative for the community he grew up in, and will work for our shared Colorado values in the State House.