An image from this morning’s town hall with Jeb! Bush in Hampton, New Hampshire has gone viral, featuring Jeb! waxing passionate about some such or other subject while a woman in the audience struggles to stay awake: 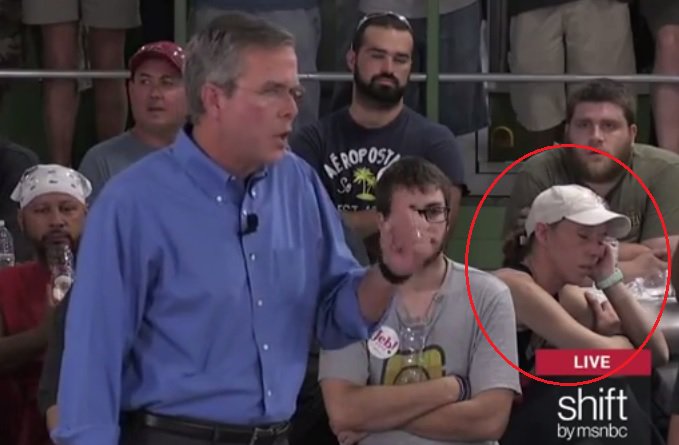 Here’s an animated .GIF of the somnolent scene in question for context–which we admit doesn’t make Jeb! look much more captivating:

But for additional needed context, we should note that the audience member was seen at other times very much alert and listening to Jeb’s! talk. Afterward, Jeb! even posed for a picture with the woman, who as it turns out had worked an all-night shift right before the town hall–certainly a passable explanation for being a little drowsy.

What a shame that nobody gives a crap about the context of a photo like this! Much like Michael Dukakis in the tank or Michelle Bachmann eating that corn dog, you can explain it away all you want–the visual is what it is, and it’s worth a thousand words.