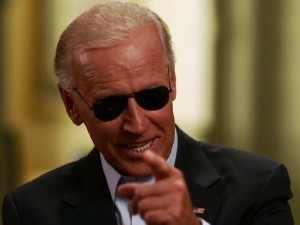 Two days after huddling with advisers about plans for a presidential run at his home in Delaware, Vice President Joe Biden on Saturday made a short unannounced trip to Washington, D.C., to meet with Sen. Elizabeth Warren (D-Mass.) at his Naval Observatory home.

Warren, a liberal icon who for months has been urged by the Democratic Party’s progressive wing to mount a presidential primary challenge of her own, notably has held off on endorsing former Secretary of State Hillary Clinton, the party’s current frontrunner for the nomination. Warren’s said the race remains wide open…

The variables that would help determine if a run for president by Vice President Joe Biden principally revolve around Democratic frontrunner Hillary Clinton, who is facing a barrage of attacks from Republicans eager to pollute her image ahead of the 2016 primaries. If Hillary makes it through the next few weeks of the kitchen sink being thrown at her, a Biden run won’t make much sense and will fizzle quickly.

Another consideration is that Sen. Bernie Sanders, whose campaign has energized liberal Democrats but doesn’t have much realistic hope of himself winning the presidency, has a lot of momentum to transfer to someone in this race. The conventional wisdom has been that Hillary would ultimately inherit Bernie’s mojo, but she still needs to present the affirmative case to liberals that she deserves their support.

In the meantime, sure. These conversations are going to happen.