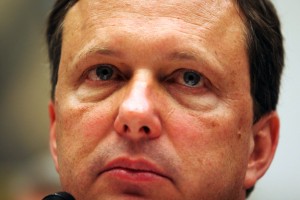 You’d think if there were anyone who’d understand the need for the Black Lives Matter protests, it would be President George W. Bush’s  FEMA Secretary Michael “Heck’ve a Job” Brownie.

But, alas, no. Apparently forgetting that he embodies the problem that Black Lives Matter is trying to spotlight, Brownie offered his radio listeners a diatribe Monday about a protest pointing out that Benjamin Stapleton was a member of the KKK and calling for Denver’s Stapleton neighborhood to change its name.

“You dip-wads. You absolute dip-wads,” said Brownie on his  KHOW 630-AM morning show (@5:15 below), arguing that Stapleton, a former Denver mayor, was a leader to create red rocks and people like Cesar Chavez has been accused of initiating violence.

Brownie played a news clip of a protester saying that Stapleton’s name is a symbol of “lingering white supremacy in our community.”

You people are so full of crap it just drives me up the wall. If you would just open your eyes and look at the fricking Stapleton development, what would you see. I bet you’d see evil white people. Then you’d see black people. Then you’d see Hispanic people. And I don’t know, you might have to dig, but you might even see some Asian people. Although I really doubt there are, like, Native American people out there, because Native Americans just live in Teepees on the reservation, so there wouldn’t be like any Indians living out at Stapleton. No. Not at all. You people are the biggest dumb-asses I’ve heard in ages. ‘We just want you to be aware that this is just a reminder white supremacy,’ said the black people living at Stapleton. God you’re dumb.