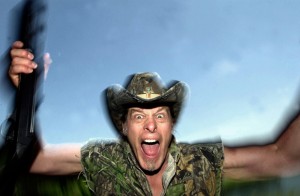 Back in April, we took note of a photo Tweeted by Rep. Ken Buck from his Washington, D.C. office, proudly holding an AR-15 assault rifle with Rep. Trey Gowdy of South Carolina. This photo struck us as a bit curious, since Washington, D.C. has very strict gun laws that outlaw Buck’s AR-15 rifle and the 30-round magazine attached to it.

After a morning of interesting back and forth between inquiring reporters and the D.C. Attorney General’s office, who at first insisted the weapon was illegal and that they were “looking into” the matter, the U.S. Capitol Police stated they had allowed Buck to display the weapon in his office under “regulations” that permit members of Congress and their staff to possess unloaded guns on Capitol grounds. The manner of how that regulation comports with local D.C. law was left unresolved, but Rep. Buck still has his AR-15 on display in the Cannon Office Building by all accounts.

If we don’t stand our ground, Barack Obama (or worse, President Hillary Clinton) will take away our guns that we rely on to defend our homes, families, and country.

That’s why I need you to hear something completely insane…

You know they tried to toss a US Congressman in jail for having his legally owned AR-15 in his office?

That’s right – my friend Congressman Ken Buck was under investigation by the Washington, DC, Metro Police because the city’s Left-wing gun regulations are so restrictive, most people can’t even legally exercise their God-given Constitutional right to bear arms (even in a private place like your office)!

He put a picture online of Congressman Trey Gowdy and himself admiring his awesome American flag wrapped AR-15 and some vindictive liberal gun-hater sent it to the police. The rest is history… 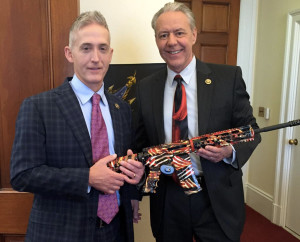 So, if The Nuge means this blog when he says “some vindictive liberal gun-hater,” because we were the ones who posted the photo of Buck with his AR-15 that led to news inquiries, we guess that’s one thing. But in terms of the rest of the story “being history,” well, our readers know that Ken Buck didn’t face any charges or sanctions for his assault rifle on Capitol grounds–in fact, it’s still there.

But that version of the story, otherwise known as the true story, wouldn’t raise nearly as much money.

That’s why I’m helping Congressman Ken Buck. He’s a guy we can trust who will fight for the values we share – especially when it comes to the 2nd Amendment. Hell, they tried to get him thrown into jail for exercising his Second Amendment rights!

That’s my kind of guy. Bold, brave, and packing heat in his office to scare off liberals.

As our longtime readers know, this isn’t the first time that The Nuge has weighed in on a Colorado political matter. Ted Nugent endorsed Tom Tancredo for governor in 2014, which because a lively sidenote in that race after Nugent denounced President Barack Obama in a radio interview as a “communist-raised, communist-educated, communist-nurtured subhuman mongrel.” Nugent also said of our state following the passage of 2013’s gun safety bills, “if ever there was a poster child for apathy, disconnect, laziness, and abandonment of We the People, and moral dereliction, it is Colorado.”

We can assume from the former statement that Nugent, like Buck, “loses his appetite” in the presence of America’s first black president. But we would kind of like to know if Buck agrees with Nugent in his assessment of the state Buck represents in Congress.

Needless to say, we hope not.