Animas River disaster: what you need to know

Colorado’s governor thinks a mine spill accidentally triggered by an EPA crew will move the state and federal government to more aggressively tackle the “legacy of pollution” left by mining in the West.

Gov. John Hickenlooper said Tuesday that much of the wastewater has been plugged up, but the state and the Environmental Protection Agency need to speed up work to identify the most dangerous areas and clean them up.

The former geologist says that if there’s a “silver lining” to the disaster, it will be a new relationship between the state and the EPA to solve the problem.

During a visit to the Animas River in Durango, downstream from the spill, Hickenlooper said tremendous progress has already been made. He hopes the river will be open for recreation in the next few days. 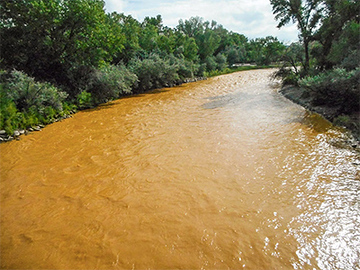 Last week, a crew working for the Environmental Protection Agency to reduce pollution from abandoned mines near Silverton accidentally released a torrent of mine wastewater into a tributary of the Animas River. This polluted water flowed through the city of Durango, turning the Animas bright yellow and forcing water users along the river to shut off irrigation and drinking water. Rafting and other tourism-related businesses in the area have been devastated by the sudden loss of income at the height of the tourist season.

It’s a very difficult situation, and unfortunately, some are trying to make it even worse by playing politics and misleading the public about the true cause of the disaster. Here are a few important points to help understand what happened and what it means for the future in southwest Colorado. Please share this information with your friends and neighbors.

Q. Did the EPA “cause” the Animas River mine water spill?

Yes and no. Abandoned hard-rock mines in the mountains above Silverton have been a source of water pollution for many years. The EPA was investigating ongoing water pollution from these mines. A large quantity of wastewater had built up behind loose debris and rushed out suddenly after the entrance to the mine was cleared. In short, the EPA did cause the spill, but not the pollution itself. The EPA was working to clean up the pollution.

Q. If these mines have been polluting for decades, why isn’t the cleanup operation a Superfund site?

Unfortunately, the designation of abandoned mines near Silverton as an EPA Superfund cleanup site, which would allow far more resources to be deployed to clean up mine water pollution, has been opposed by the local government of San Juan County and mining interests. Some say the designation would hurt tourism revenue, but more importantly, mining interests fear restrictions on future operations if the Superfund were used to clean up existing pollution. Mining companies have consistently failed to take responsibility for the longstanding pollution problems near Silverton and thousands of other mine sites across Colorado and the West.

Q. What happens next?

As water conditions in the Animas River slowly return to their pre-spill state, the state and federal governments are working together to assess the extent of the damage and restore the river to health and economic prosperity. It’s critical that local businesses and water users get help and compensation to minimize their losses. But above all, it’s time for mining interests and local politicians who support them to get out of the way of properly cleaning up Silverton’s polluted abandoned mines. Without the full resources of the federal government to treat mine wastewater and prevent catastrophic build-ups, downstream communities along the Animas will continue to be threatened by disaster.

Please take a moment to share this important information with your friends and neighbors–especially in the areas affected by the spill. Traditional opponents of the EPA like oil and coal companies are misusing this incident to unfairly attack good people who are working to leave our state better than they found it. We owe it to ourselves and future generations to clean up the mess caused by the mining industry in the past. And when the news cameras are gone and the politicians are done talking, the EPA will still have an important job to do in southwest Colorado.

Thanks very much for helping us set the record straight.