Get More Smarter on Wednesday (Aug. 5)

Don’t feel bad — we didn’t make the cut for the big debate, either. Let’s Get More Smarter with Colorado Pols! If you think we missed something important, please include the link in the comments below (here’s a good example).

► The 2016 Presidential race enters its next stage on Thursday when Fox News hosts (most) of the GOP candidates for the first debate of the campaign. Yesterday, Fox announced the “Top 10” Republican candidates who will take center stage in Cleveland — and the second tier of hopefuls who will participate in the Junior Varsity debate. From Politico:

The top 10 candidates will debate in a two-hour event at 9 p.m. Eastern time on Thursday. The also-rans will be invited to appear at a separate, one-hour debate, which airs at 5 p.m. Eastern.

Colorado Pols will be running our traditional Debate Diary during both of the Thursday debates.

► Democrat Hillary Clinton was in Denver on Tuesday for her first official Presidential campaign stop in Colorado. Clinton highlighted immigration and women’s health issues during her Colorado visit, taking particular aim at Jeb Bush following his earlier statements in support of Republican efforts to cut federal funding for Planned Parenthood. 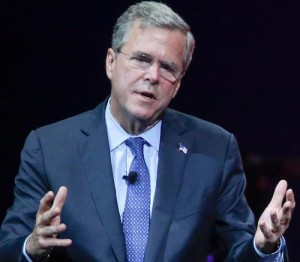 Holy Crap! As he campaigns for the Presidency, Jeb Bush is morphing into George W. Bush before our very eyes.

Looking to curry favor with religious conservatives at the outset of a competitive primary fight, Bush on Tuesday repeated his call to cut off funding for Planned Parenthood — and then he went even further, questioning the amount of government support for women’s health programs generally.

The Romneyesque unforced error drew a fast and furious backlash from Democrats, causing Bush to backtrack almost immediately and to acknowledge that he “misspoke.”

► Remember, it’s the children who are really getting the short end of the stick with all of the shenanigans related to Colorado public schools lately. Meanwhile, even diehard Republicans feel compelled to admit that Jefferson County School Board Member Julie Williams is a complete disaster.

► Red Rocks Park is now officially a national historic landmark — and so is the Mount Morrison Civilian Conservation Corps Camp located nearby.

► Denver Mayor Michael Hancock kicks off a campaign today asking Denver voters to approve increases to hotel and car rental taxes in an effort to generate money to revamp the National Western Complex.

► It’s a good thing that nobody really listened to Walker Stapleton when the Republican State Treasurer was advocating big state investments in gold.

► Colorado Senator Cory Gardner (R-Yuma) voted in favor of a Senate proposal to cut federal funding for Planned Parenthood. Remember when the editorial board of the Denver Post wrote last fall that Gardner would “pose no threat to abortion rights” if elected to the Senate?