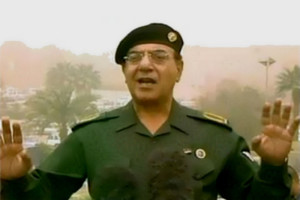 Comical Ali. Baghdad Bob. The former Iraqi Information Minister (real name: Muhammad Saeed al-Sahhaf) secured his name in Internet infamy when he appeared regularly during the 2003 Iraqi Invasion to confidently deny the American surge into Baghdad and U.S. military success in general — sometimes with American tanks as his backdrop. As The Atlantic wrote in 2013:

Sahaf’s nickname, “Baghdad Bob,” now denotes someone who confidently declares what everyone else can see is false–someone so wrong, it’s funny.

Back here in Colorado, opponents of the campaign to recall three right-wing Jefferson County School Board members are channeling Baghdad Bob in their response to the news that more than 90,000 signatures supporting the recall were gathered in less than three weeks. This would be a massive success for a grassroots group for any issue on any level, which makes it difficult for opponents to tamper enthusiasm.

Enter Sheila Atwell, head of a group called “Jeffco Students First” that supports the right-wing majority school board. Atwell told 9News last weekend that she is surprised that it took 17 days to get the required signatures, saying that they should have been able to do it in a week:

We did the math here. In order to gather more than 90,000 signatures in just one week, organizers would have had to average 9 signatures PER MINUTE, 24 hours a day. That’s completely silly, of course.