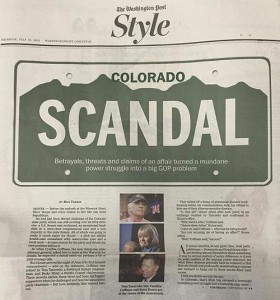 “Yes, our man, Rush, will announce and introduce him Monday during his show,” Crawford emailed me last week when asked if he’d decided which conservative would fill Corporon’s shoes. (In recent weeks, the station held on-air auditions for the job.)

Meanwhile, Corporon, along with KLZ’s other “liberty lineup” hosts Ken Clark and Kris Cook, who resigned along with Corporon, lit deeply into Crawford at a recent “Liberty Libations” event. Their presentation (below) to the libations folks illuminates not only their version of the events involved in the trio’s decision to resign from the radio station but also the angry divisions within the state GOP.

The videos were posted by GOP activist Marilyn Marks. It’s all interesting, if you’re a junkie and you want to pass some weekend down time in front of your computer.

But it gets especially good at about the 22-minute mark. The second video includes Tancredo talking off screen.