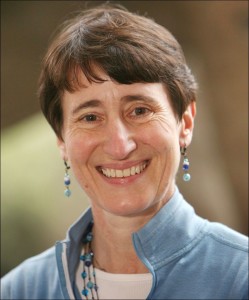 Secretary of the Interior Sally Jewell.

As the Grand Junction Sentinel’s Charles Ashby reports, a much-anticipated confrontation between backers of a northwest Colorado coal mine and Interior Secretary Sally Jewell this weekend didn’t go off with quite the bang expected:

Interior Secretary Sally Jewell reassured northwest Colorado officials and U.S. Rep. Scott Tipton, R-Colo., that the U.S. Department of the Interior will complete work on a study needed to keep open the Colowyo coal mine.

“We believe the best way to deliver certainty to the Colowyo mine and the people who work there is to fix the deficiencies,” Jewell told more than a dozen county commissioners, city councilors and others at the Glenwood Hot Springs Lodge on Friday night. “I’m confident we’ll do it within the 120-day deadline.”

A Sept. 6 deadline looms for an Interior Department agency, the Office of Surface Mining, Reclamation and Enforcement, to complete work evaluating the mine’s contribution to global warming.

The study was required by U.S. District Judge R. Brooke Jackson, in a case in which an environmental organization, WildEarth Guardians, challenged the agency’s approval of the mine, which employs 220 people from Moffat and Rio Blanco counties

“We feel we are ground zero for your department,” said Moffat County Commissioner John Kinkaid.

Ever since a federal judge ordered the Department of the Interior to complete a required environmental assessment of the effects of expanded coal mining at two mines near Craig that supply a major coal-fired plant there, ruling that Interior failed to follow environmental analysis procedures under the National Environmental Policy Act, local politicos and energy-industry benefactors have been irate about the possibility that a judge could overrule the expansions retroactively, jeopardizing several hundred mining jobs.

The potential loss of 220 jobs at the Colowyo mine in northwest Colorado amounts to the equivalent of 50,000 jobs in Denver, he said. 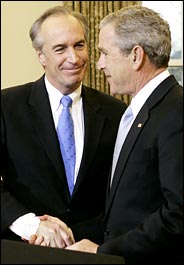 We’re not sure what kind of wacky math Moffat County Commissioner John Kinkaid is using there, but let’s take a look at the actual ruling from Judge R. Brooke Jackson that’s causing all this supposed uncertainty:

There’s a big piece of the story of these mine expansion approvals and the subsequent lawsuit against them that’s missing from most news reports: the expansions environmentalists sued over were approved in 2007 by George W. Bush-era Interior Secretary Dirk Kempthorne. Incidentally, this was the same year that Kempthorne was awarded the “Rubber Dodo Award” for the distinction of having protected the fewest endangered species of any Interior Secretary in American history. Like his predecessor Gale Norton of Colorado, Kempthorne and the Interior Department under Bush were repeatedly criticized, and eventually sued, for disregarding crucial environmental considerations when making decisions about energy development.

Such as whether or not expanding coal mines in western Colorado would hurt the environment? Suddenly this story starts to make a very different kind of sense, and the politicos demanding the process be appealed and/or short-circuited don’t look so altruistic.

Since the ruling in May, energy industry mouthpieces have been shrieking at the top of their lungs about the possibility of a few hundred coal mine jobs being lost if the Colowyo and Trapper mines were to close, demanding President Barack Obama’s Interior Department appeal this ruling that the previous administration’s Interior Department broke the law. For reasons that appear quite sensible with all the facts in view, Obama’s Interior Department declined to do so, and is instead working to properly complete the required assessment in accordance with NEPA. Coal industry supporters have tried to make this about the environmental group that filed suit, even trying to organize a boycott of companies that support the group in question like New Belgium Brewing in Fort Collins.

Well folks, if you can think past the wall of contrived weeping and gnashing of teeth, it looks like a very legitimate concern is being raised here–and a court ruling that agrees does not mean it’s time to boycott one of Colorado’s best breweries. The environmentalists involved with the suit say they don’t want the mines shut down, at least not tomorrow–they want the environmental assessment that approved their expansion to be conducted in accordance with the law. And that’s what the Interior Department says it wants, too. According to Secretary Jewell, that’s exactly what’s going to happen.

So…shut up and let it happen.