(Um, what? – Promoted by Colorado Pols) 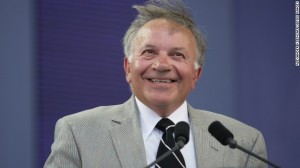 Facebook deleted a post by Rep. Tom Tancredo  in which the former Colorado Congressman advised ISIS not to attack America on July 4 but, instead, “to try something during spring break or the Marijuana smoke out celebrations on April 20.”

Tancredo said he has “no idea why it was taken down.”

“There were over 9k hits before they got around to it,” emailed Tancredo, who supports pot legalization and was attacked mercilessly by fellow Republicans for taking his pro-marijuana position. “Maybe it was based on complaints. Maybe lots of teenagers and dopers protested.  I don’t think it was because they believed ISIS takes my advice.”

I told Tancredo Facebook might take a dim view of terrorism jokes or think he’s a terrorist, and he replied, “Well I am sure some of those 5000 ‘friends’ I have would agree!”

In fact, Tancredo has proposed that America “take out” Mecca and other Islamic “holy sites” in response to a terrorist attack on the United States. That’s terrorism. 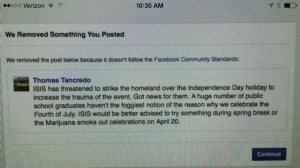