UPDATE: ThinkProgress reports, “traditional marriage” advocates may have gotten out a little over their proverbial skis this time:

A proposed amendment to the Colorado constitution appears designed to eliminate same-sex marriages. Yet it is so broadly drafted that it would most likely eliminate marriage entirely in the state of Colorado.

The proposed amendment, which would be subject to a ballot initiative if its supporters collect enough signatures, provides that “marriage is recognized as a form of religious expression of the people of Colorado that shall not be abridged through the state prescribing or recognizing any law that implicitly or explicitly defines a marriage in opposition or agreement with any particular religious belief.” It’s the last part of this text — the reference to “any particular religious belief” — that would prevent marriages from taking place in Colorado. [Pols emphasis] 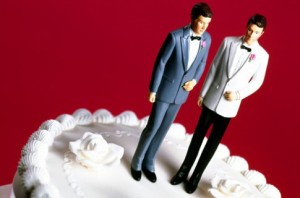 Two men on a cake! Lord have mercy.

A proposed ballot initiative filed Thursday would redefine same-sex marriages in Colorado as civil unions. A second initiative would allow wedding-related businesses opposed to gay marriage to hire a contractor to serve the couples…

Dave Montez, the executive director of One Colorado, the state’s largest advocacy group for gay rights, said the initiatives are an attempt to undo the Supreme Court decision.

“This initiative is an unnecessary attempt to radically redefine all marriages in Colorado in order to undermine the Supreme Court’s recent decision,” he said. “Even before last week’s Supreme Court decision, the 37 states that already had marriage equality had proven that when loving, committed, gay couples share in the freedom to marry, families are helped and no one is hurt.”

The first of these two anti-LGBT ballot initiatives seems to have little chance of success. Redefining existing same-sex marriages after they have been validated by the U.S. Supreme Court seems like an incredibly gratuitous insult, not to mention pointless in the face of the court’s ruling that these are marriages like anybody else’s marriage. This initiative is in exercise in exactly the kind of discriminatory logic the Obergefell v. Hodges decision struck down–that there is a difference between rights two same-sex persons have versus heterosexual couples.

As for the second initiative, we expect to see many such attempts to chip away at newly-won rights for LGBT citizens in the coming months as the battle shifts to public accommodation instead of basic legal guarantees. Without protections against discrimination when doing business or obtaining publicly available goods and services, equality doesn’t really mean that much. At the same time, this is a more nuanced argument to make with voters who aren’t familiar with the issue.

Bottom line: the viewpoint of the state’s electorate has changed dramatically since 2006, when an anti-LGBT statewide measure passed and even modest civil unions failed at the polls. The public overwhelmingly supports the Supreme Court decision upholding marriage equality today, where they didn’t ten years ago.

So no, we don’t think LGBT rights supporters should be worried about these proposals. In fact, much like Republicans have painfully learned with the “Personhood” abortion bans over the years, the biggest worry could be blowback against their proponents.