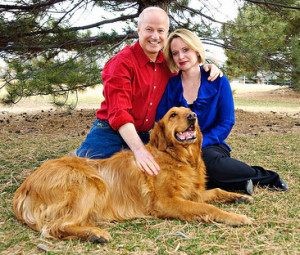 Mike and Cynthia Coffman. And dog.

For the last two weeks, a member of the Coffman family has dominated political headlines in Colorado, though not the Coffman most people think of. When we last left off with GOP Rep. Mike Coffman of Aurora, he was vowing to repeal Obamacare in the wake of last week’s U.S. Supreme Court ruling, and hurrying to pivot to “jobs and the economy” in response to the court’s ruling in favor of same-sex marriage equality–but still not getting anything like the press his embattled wife was receiving.

Which we fully assume he considers to be a good thing.

Just before the “Coffmangate” blackmail scandal involving Rep. Coffman’s spouse Attorney General Cynthia Coffman broke open in the middle of June, Mike Coffman’s remarks on a radio talk show comparing the Department of Veterans Affairs to the Middle Eastern terrorist group ISIS made the rounds with no small degree of controversy. But since then, we’ve seen very little in the way of earned media for Rep. Coffman beyond those brief statements, regarding either the overbudget Aurora VA hospital has had spent so much time grandstanding on as an election issue, or anything else.

And naturally, he’s had nothing to say about his spouse’s political implosion.

But the world moves on: just today, Mike Coffman’s name was mentioned again as one of the most competitive races in the Mountain West for 2016. Roll Call’s Rothenblog:

Coffman’s decision to seek re-election puts a wrench into Democratic plans to take over his open seat. But that doesn’t mean the party will give him a free pass. President Barack Obama won the 6th by 6 points in 2012 and 9 points in 2008, but Coffman easily dispatched former state Speaker Andrew Romanoff, 52-43 percent, in 2014. State Sen. Morgan Carroll has been mentioned on the Democratic side but the field is still fluid. As far out of reach as this race seems for Democrats, it’s probably the type of district the party has to win in order to get the majority in 2016…

After Andrew Romanoff’s unexpected shellacking at the polls in 2014, the second win for Rep. Coffman over resurgent Democratic opponents since his congressional district was remade into a closely divided battleground in 2011, conventional wisdom might have declared him safe. But the CD-6 electorate in 2014 seems to have almost uniquely punished Romanoff for running an uninspiring centrist campaign, sending him to defeat by a greater margin than overlapping Democratic candidates in other races. In 2012, low-budget underdog challenger Joe Miklosi came far closer to defeating Coffman than Romanoff did, a result that demonstrates the potential in this district for a candidate who can turn out the Democratic vote–or at least not demotivate base Democrats like Romanoff did with his milquetoast “balance the budget” message. And above all, the difference in the electorate between the 2012 presidential elections and last year’s midterms gives Democrats hope that 2016 may be the year Rep. Coffman’s number comes up.

Bottom line: Mike Coffman has proven a resilient incumbent, able to reinvent himself in dramatic fashion to appeal to a very different electorate than the hard-right conservative voters who originally elected him to Congress. But he has also benefited circumstantially from weak opponents, and a strong “Republican wave” in 2014. A combination of his starkly opposed past positions on the issues, continuing predilection for embarrassing verbal diarrhea like the ISIS/VA crack or his declaration in 2012 that President Barack Obama “is just not an American,” and the growing possibility of the right challenger in the right year, means that no matter how handily he was re-elected in the last election, Rep. Coffman remains vulnerable in the next one.

That perennial vulnerability is why Coffman chose not to run for the U.S. Senate next year, with his negatives potentially attracting much more attention in that marquee statewide race. His best career option, as we long expected he would decide, was to fight to hold CD-6–considered vital to either side’s aspirations for control of Congress.

The problem is, in 2016 Democrats may finally have the right combination of circumstances and human capital to take Coffman out.