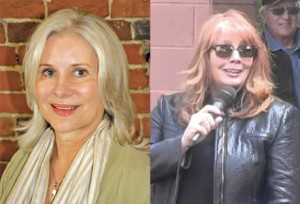 Today, two principal figures in the Coffmangate extortion scandal announced their resignations from posts in the Colorado Republican Party, following the vote last week by the party’s executive committee 22-1 to support embattled chairman Steve House. The first resignation was that of elections crackpot activist Marilyn Marks, exiting the state GOP’s Elections Oversight Committee. From her scathing, if a bit muddled and agitated resignation letter dated today:

I sincerely regret that I cannot serve effectively on this committee to help mitigate the escalating risks to Republican candidates as we move toward 2016. I cannot advance the righteous cause of the party where leadership provides inconsistent policy guidance with frequent embarrassing reversals and re-­‐reversals of direction on issues of election quality. I have wasted much valuable time that should have been devoted to 2016 election security in attempting to recover from erratic changes of policy direction from Chairman House…

My experience with Chairman House in election public policy matters is consistent. His policy is unfailing inconsistency. No matter which policy he adopts and asks me to submit to officials, the position will be reversed if officials object. [Pols emphasis]

…Most troubling is the fundamental philosophy House expressed to me several weeks ago in the context of the party’s future policies for election security. He stated that the job of the party is to represent both the voters and the official stance of the Republican election officials in suitable compromises. He stated that our positions must be acceptable to election officials, implying that the Republican party is to represent the government in dealing with the voters. Such backwards philosophies will only lead to more conflict with House and more episodes of his approving, then disapproving and then disavowing the work of the Committee. I cannot be effective in such an environment. The work of the Committee is to promote oversight of elections, not to represent the interests that the government may have in denial of the problems.

Marks’ letter of resignation was addressed to Becky Mizel, the chair of the Elections Oversight Committee and also chair of the Pueblo Republican Party. You’ll recall that Mizel, a longtime malcontent within the Colorado GOP and one of the cabal of GOP officials led by Attorney General Cynthia Coffman who allegedly threatened Steve House with reprisals if he didn’t resign, was the lone vote cast against House on the GOP executive committee last Friday. A short while after her own resignation, Marks posted to Facebook:

Becky Mizel resigned today as Chair of the Election Oversight Committee of the Republican state party. I had just done the same a bit earlier in the day. We were following the direction of Chairman House in submitting comments to the Secretary of State on Watcher rights and responsibilities with the Republican Party position. He then disavowed our association with the party…

We haven’t heard if Mizel has also resigned as chair of the Pueblo Republican Party, but in the aftermath of Friday’s vote, she couldn’t be more isolated. At this point, Mizel’s continued leadership of Pueblo Republicans is a detriment to that party’s efforts there, since it’s clear that Mizel cannot work effectively with the state party’s chairman. It’s what happens, as the saying goes, when you strike at the king but don’t kill him.

It’s widely believed that Marks’ agitation about “threats” to fair elections in 2016 were a big part of her alienation of Steve House. Marks’ unreasonable and strident posturing on election issues has made her a pariah on both sides of the aisle, but Republicans humored her for long enough to leave her deeply entrenched–and ready to formulate red-on-red conspiracy theories over basically any quibble. As for Mizel, it’s easy to find fellow Republicans willing to assign the label of “batshit crazy” to her, not to mention Democrats–which helps explain why she was so ready to team up with Tom Tancredo to frag the state GOP’s leadership.

Where do these resignations leave the other principal (employed) actor in the “Coffmangate” drama, Cynthia Coffman?

Not looking real good, that’s for sure.