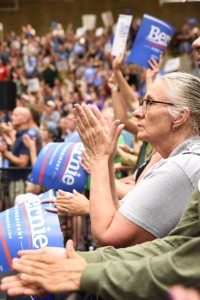 The Denver Post’s John Frank reports on last night’s big rally for Sen. Bernie Sanders of Vermont’s upstart presidential campaign, which drew his largest crowd yet to the University of Denver’s Ritchie Center:

The 73-year-old Independent spoke for an hour and hit a nerve on economic issues as he advocated for an end to income inequality as well as a higher minimum wage, pay equity for women and more government spending on infrastructure.

“What we are doing tonight is we are sending a message to the billionaire class and that is: You can’t have it all!” Sanders said, shouting to a crowd that filled a University of Denver gymnasium and spilled onto a nearby lacrosse field. “The unquestionable greed of the billionaire class is destroying this nation and it has got to end.”

The size and energy of the crowd — which gave Sanders numerous standing ovations and repeatedly chanted his name — reflected a craving among some in the Democratic Party for an alternative to 2016 front-runner Hillary Clinton, the former secretary of state and first lady.

There’s a temptation in the media today to use the growing popularity of Sanders’ campaign as evidence of a groundswell against the likely 2016 Democratic nominee Hillary Clinton. But we don’t see an insurgency against any particular candidate being expressed by Sanders or his supporters as much as a desire for better policies–if you will, more traditionally Democratic policy priorities, like a higher minimum wage, affordable education and health care, and a robust social safety net.

Over the last few decades, and especially since the election of Barack Obama as President in 2008, much of the traditional Democratic platform has been pushed out of “the mainstream” by successful conservative domination of the limits of the debate. The “Overton Window” theory, which originates with a conservative thinktank in Michigan, helps explain the range of mainstream political proposals at any given moment–and how that range of acceptability is itself manipulated by the media and the pundit class. In recent years, this process has not been well grounded in reality, as the right became increasingly unrealistic about their own agenda, and the vilification of Obama exaggerated distantly beyond anything he has actually accomplished as President.

If you accept that the chances of Sanders winning the Democratic nomination for President are not good, which you should and he does, then his campaign makes another kind of sense: kicking the “Overton Window” back in the direction of progressive policies from the last few decades of skewing heavily to the right. This means rallying the public around progressive policy solutions, and pushing the Democratic frontrunner to embrace a more progressive agenda.

Objectively speaking, it’s hard to see how this is a bad thing. For anyone.