A story last night from CBS Denver’s Shaun Boyd caught Colorado’s junior Sen. Cory Gardner in a major contradiction with regard to his recent proposal to make some forms of birth control available over the counter. Contraceptives are already required to be covered without cost to patients as part of the Affordable Care Act, but Gardner’s proposal to “encourage” pharmaceutical companies to apply for over the counter status for contraceptives is meant to fulfill a campaign promise from Gardner to make obtaining birth control “easier and cheaper.”

Since it’s hard to be cheaper than free, this claim has always been a little suspect:

Chapin believes the bill would make birth control less accessible because it would be less affordable.

That last sentence is where Gardner screws himself, and the reason is simple: Gardner is now relying on the dreaded Affordable Care Act to continue to provide no-copay prescription birth control for women with insurance. That represents a major change from Gardner’s campaign-trail promises, where he claimed a “fix” to Obamacare was needed to allow birth control to be sold over the counter. He never addressed the affordability argument directly back then.

But we do know what Cory Gardner thinks of the Affordable Care Act, don’t we? That would be the same Affordable Care Act that Gardner has voted literally dozens of times to repeal. Understand this: the law that Gardner has voted to repeal over and over is now what he is relying on to refute the charge that his proposal would make birth control less affordable. Does this mean that Gardner is now a supporter of Obamacare’s contraceptive coverage mandate? If so, that is truly national news.

Why, you ask? Because in 2012, Cory Gardner signed what’s become known as the “Scalise Letter,” named for Rep. Steve Scalise of Lousiana, in which a large group of self-identified “pro life” members of Congress demanded that then-Health and Human Services Secretary Kathleen Sebelius suspend the contraceptive coverage requirement of Obamacare: 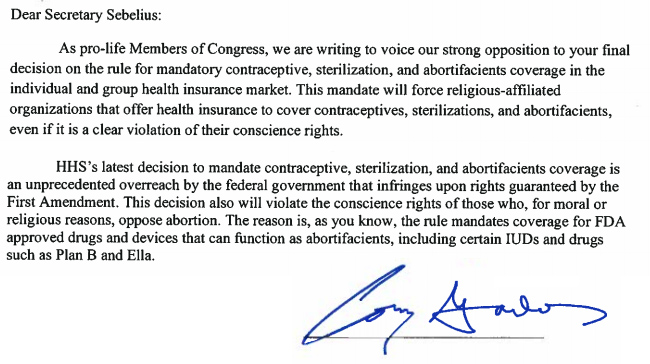 There’s just no way around it: in order for Gardner to believe in good faith what he told Shaun Boyd, he can’t still endorse the letter he signed demanding that contraceptive coverage not be mandated by Obamacare. He certainly can’t vote to repeal Obamacare wholesale again, but for Gardner it means more than that as a signatory of the Scalise Letter. Either Cory Gardner has just abandoned a major Republican policy plank, and sold out his fellow “pro-life members of Congress…”

Or “Con Man Cory’s” jig is finally up.

Either way, this is the next question for the next reporter. Please. Ask it.