Somebody Give Ellen Roberts a Shovel

THURSDAY UPDATE: Charles Ashby updated his story today, and in all fairness, it looks like he quoted Sen. Ellen Roberts wrong. As our readers already knew, Roberts voted against a budget amendment to restore funding for the state’s successful IUD contraception program, not for it as Ashby reported yesterday:

Later, Democrats in the GOP-controlled Senate tried to get funding for the IUD program through the state’s budget. Roberts said she voted with Democratic Sen. Pat Steadman of Denver, a member of the Joint Budget Committee, against spending the money. [Pols emphasis]

Readers debated the fact that Sen. Pat Steadman voted against the “Long Bill” amendment to restore the LARC program’s funding, which as you can see Roberts uses as cover for her own vote against this amendment. But that’s not the whole story: members of the Joint Budget Committee almost always vote against Long Bill amendments, since they are the ones who hashed out the compromises to produce the budget to begin with. It’s a matter of principle that JBC members do so even when it’s an issue they would otherwise support, as we expect Steadman would readily tell you he does.

Unfortunately for Ellen Roberts, she can’t claim JBC membership as an excuse for voting against something she goes to great pains to claim to support. The public may not get this distinction, but it’s our hope that longtime capitol reporters like Ashby will going forward. Original post follows. 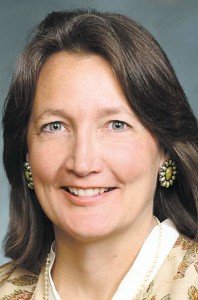 We took note last week of a story in The Nation about the failure to renew funding in the Colorado General Assembly this year for a program to provide long-acting contraceptives to low-income women–a program credited with helping dramatically lower the rate of teen pregnancy in our state. Sen. Ellen Roberts of Durango, now exploring the possibility of running for the U.S. Senate, claims to have supported this IUD funding, but voted against it during debate over the state’s budget when it was presented as an amendment. As Roberts explained to The Nation’s Katha Pollitt:

The clincher: No-cost birth control is already provided by the Affordable Care Act, so why should the state pony up? Republican Senator Ellen Roberts told me she might have supported the bill if she’d had a good answer for that… [Pols emphasis]

As you can see, Roberts isn’t making some kind of “process argument” for voting against the LARC funding, which was introduced as Amendment J.066 to this year’s budget “Long Bill.” She thought it was unnecessary because Obamacare requires contraceptive coverage.

Keep that in mind as you read the Grand Junction Sentinel’s Charles Ashby today, in which Roberts appears to tell a very different story:

Later, Democrats in the GOP-controlled Senate tried to get funding for the IUD program through the state’s budget. Roberts voted for spending the money, but the effort died nonetheless. [Pols emphasis]

“You could make all the same arguments for why you would vote against the IUD bill as the teen pregnancy bill,” Roberts said. “But they (the Democrats) won’t acknowledge that I had that same bill.”

So, we want to give Charles Ashby, a reporter we trust, full latitude to confirm this quote from Roberts–and allow for some other possibility that might explain what appears to be a clear contradiction. First, Roberts tells The Nation she didn’t support the IUD LARC program because of the fact that Obamacare mandates contraceptive coverage. Then, she tells the Sentinel that she did support it, citing a budget amendment she supposedly voted for. But our readers already know she voted against that amendment–so unless there’s some other vote out there that hasn’t been brought to our attention, Roberts simply appears to be all over the map.

Which is where she’s been for some time, trying to reconcile her record in the legislature with a new hard-right persona that Republican primary voters might actually vote for.

And it’s not going well at all.