Ambush in the Public Interest 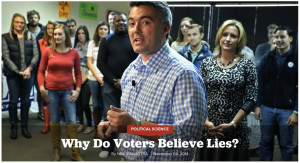 In an online Denver Post op-ed yesterday, I urged reporters to seek out and interview hiding politicians. I gave some recent Colorado examples, like Rep. Mike Coffman hiding from reporters after he said he wasn’t sure Obama was an American.

On Twitter, former CU regent Tom Lucero, a Republican, told me I left out instances of Democrats hiding from reporters, but he won’t provide me with any examples, saying he doesn’t want to do my “job.”

Too bad, because I’d like to see his examples, and I’m sure they exist. But I couldn’t think of many in recent memory (I mentioned Udall)–and my piece focused on Colorado reporting.

In any case, I wish Lucero would work with me, because if journalists did this more often, it would benefit all of us.

The ambush interview shouldn’t be relegated to showboaters like Bill O’Reilly and consumer reporters, like (mostly) the investigative units at 9News and channel 7.

In my piece, I quoted Eli Stokols, who told the Columbia Journalism Review in March that among Colorado reporters, “There seems to be a reluctance to hold people accountable for policy positions.”

What’s not to like about that suggestion, regardless of where you sit on the partisan spectrum? But how to do it?

One simple way is to not let public officials hide out and avoid answering questions. Journalists should track them down and force them to respond.

For example, State Treasurer Walker Stapleton is under fire for telling conservative radio-host Mike Rosen he did not support a proposed law to bolster Colorado’s public pension program when, in fact, he did support the legislation.

What are other examples from any politician in Colorado?