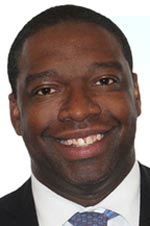 This is Sean Bradley. Do not take campaign advice from this man.

As Jon Murray reports for the Denver Post, Bradley finally tried to stick a band-aid on that gaping campaign wound that he caused for himself:

Denver City Council candidate Sean Bradley said Friday that if he wins a June 2 runoff, he will leave his job as president and CEO of the Urban League of Metropolitan Denver.

Bradley’s comments to The Denver Post, after declining to answer the question definitively earlier this week, put to rest speculation that he might try to work both jobs.

He started at the Urban League in January. He said Friday that he would not step down immediately, instead making arrangements to help the organization transition to a new leader. He likely would leave the Urban League by the time new council members take the oath in mid-July, Bradley said.

“The reality of it all is, if and when we win this race, there was no way I was going to be able to do two of these jobs,” he said. [Pols emphasis]

Thus ends one of the more inexplicable self-inflicted political wounds we’ve seen in quite awhile. By refusing to say if he would quit his current job if elected to the Denver City Council, Bradley gave his opponents plenty of time to question his commitment to the job he is seeking, and he made himself look ridiculous in the process.

Did Bradley not know that City Council is a full-time job? Did his bosses at the Urban League not know he was running? Both questions seem absurd, but why else would he refuse to even acknowledge that he would need to quit his current job if elected?