Conservative Running for Denver City Council Has Some Explaining To Do 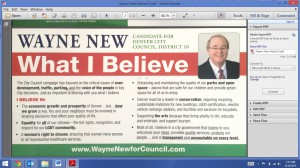 Denver City Council races are supposed to be all sweet and nonpartisany, and part of me really wishes they could be that way. But if you want to get a full pictures of a candidate, you’d be stupid to ignore their partisan history. Here’s a case in point.

District 10 candidate Wayne New, who changed his voter registration from Republican to unaffiliated in March, is distributing an ad spotlighting a “woman’s right to choose” among his top priorities. The mailer reads (See below.):

The City Council Campaign has focused on the critical issues of over-development, traffic, parking, and the voice of the people in key City decisions. Just as important is sharing with you what I believe. I believe in:

…A woman’s right to choose, ensuring that women have access to all reproductive healthcare services.

The advertisement doesn’t tell you that New contributed $250 to Colorado Senate candidate Cory Gardner in August of last year.

Of course New’s mailer is silent about this. Anyone who’s politically conscious knows that 1) donating money to Cory Gardner and 2) having a woman’s right to choose as one of your top priorities are 3) mutually exclusive.

Cory Gardner, now our U.S. Senator, made anti-choice legislation a centerpiece of his rise to political power, earning high praise for years from hard-line anti-choice groups, which helped him win over Republicans.

Once Gardner won his Republican primary, and began courting moderate voters across the state, he promptly abandoned his longstanding support for  Colorado’s personhood amendment, which would have banned all abortion, even for rape and incest, as well as some forms of birth control.

Gardner drove reporters nuts by refusing to acknowledge the existence of the federal personhood bill, even though he was a co-sponsor of it! Watch this amazing video of Gardner, and let me know how New could possibly support this guy, if choice is truly so important to him.

Remember, the apologists for Gardner, like The Denver Post’s editorial page, which also endorsed Wayne New, said choice isn’t so important nowadays. If only this were true. (Think Texas.)

In any case, Gardner’s victory over pro-choice Sen. Mark Udall was a tragedy for the pro-choice movement, and if you gave money to Gardner, you are complicit in that tragedy.

That’s why Wayne New’s partisan history matters. And it goes beyond choice.

“I have watched Charley Brown and Jeannie Faatz, two other UTR [Under The Radar] Republicans cast reactionary and negative votes against many of the progressive ideas that have come before City Council,” emailed Tom Hart, a resident of Congress Park with ties to the community that go back 50 years. “I don’t think the voters in this district want to elect obstructionists to the City Council at this important time in Denver’s development.  There are certain key aspects of the Republican philosophy that would make it hard for New to vote the will of the majority of voters in this district.”

(Click here to see some of New’s other GOP donations: Mitt Romney, John McCain, and the Republican National Committee.)

Sorry to be a buzz kill for anyone who thinks partisanship should be left to the whisper gallery in Denver’s District 10 City Council race. But if a guy like Wayne New is going to claim to be a pro-choice leader, and he’s claiming to hold  other progressive ideas, he needs to explain why he donated to Cory Gardner.

Correction: This blog post initially listed Wayne New as a “registered Republican.” In fact, he changed is party affiliation from Republican to unaffiliated in March.

[Disclosure: I support New’s District 10 opponent, Anna Jones, though I live outside the district.]