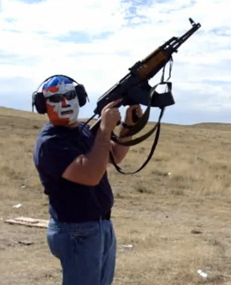 MONDAY UPDATE: Using info from a ColoradoPols commenter below, I’ve confirmed that the co-owner of a BBQ joint that will give “white Americans” a discount is an active Republican candidate for the Colorado State House.

The story about the discount for white people, originally aired by Denver’s NBC affiliate, has gone viral nationally. But news outlets haven’t reported Antillon’s connection to the Republican Party.

Calls to Antillon’s restaurant, Rubbin Buttz, to find out if his “White Appreciation Day” has the backing of any of Antillon’s Republican colleagues or the Colorado Republican Party were not returned. Neither did Antillon respond to an email seeking comment.

Denver’s NBC affiliate, 9News, aired a story Thursday about a BBQ joint in Milliken, Colorado, that’s planning to give “white Americans” a discount later this month. From there, the story has gone viral nationally.

But news outlets failed to report that the co-owner of the restaurant, Edgar Antillon, who’s promoting his restaurant’s “White Appreciation Day,” appears to be the same conservative activist who ran as a Republican for the state legislature (District 35) in 2010, served as the Adams County chair of Mitt Romney’s Hispanic outreach effort, called “Juntos con Romney,” and organized extremist pro-gun events.

Calls to Atillon’s restaurant, Rubbin Buttz, to confirm Antillon’s background were not returned, but photos, as well as a Washington Times piece referencing his gun background, make me think it’s the same guy.

When Antillon made his legislative run in 2010, the progressive blog ColoradoPols drew on reporting from The Denver Post and provided some background on the Republican candidate,:

Antillon pled guilty to perjury after being arrested on two counts of felony impersonation in 2004. Antillon’s record includes fully 18 failure-to-appear counts on numerous mostly minor charges. Antillon told Bartels that family troubles as a youth made it difficult to appear in court, but he apparently has time to maintain a Youtube pseudonymous identity as “Juan a Be the Luchador” where he frequently poses with assault weapons (above). Antillon was personally introduced at the GOP state assembly by Frank McNulty, highlighting Antillon’s race as one they can, uh, win… “

In 2013, Antillon appeared again to organize a “Guns for Everyone” rally at the state Capitol. He and others vowed to pack concealed heat at the event, which turned out to be a bust but managed to capture the media spotlight anyway. Last year, he grabbed attention by advocating that legal marijuana users get gun permits.

Antillon says the discount isn’t meant to discriminate, but instead bring people together. He added that he has been the target of racism in the past. He hopes opening up the discussion will prompt others to think differently about race.

“White Appreciation Day” is meant to bring people together? Looks more like a media stunt from a guy using his conservative-activist background to draw attention to his business. That should have been part of the news stories.