One Down, One to Go In Public Lands Debate

Republicans in the Colorado legislature have been trying to figure out how to seize control of national public lands in Colorado, but they’re not having much success.

One such effort, SB-232, failed to make it through the State Senate last night when Republicans couldn’t keep their votes intact; sponsored by Sen. Randy Baumgardner, SB-232 would have created a “Federal Land Management Commission” that would try to figure out how the state would manage federal lands. Sportsmen were not big fans of this bill, as the Denver Post’s Scott Willoughby pointed out last week:

With the clock winding down on the 2015 Colorado General Assembly calendar, the prophesy foretold by wary sportsmen alarmed by an increasingly radicalized contingent of elected officials in the West has entered the rudimentary stages of reality. To the fear and dismay of many who value the wide-open spaces intrinsic to Colorado — not to mention their tax dollars — the widely unpopular yet enduring attempt by this faction of officials to wrest control of federally managed public lands will move one step closer… 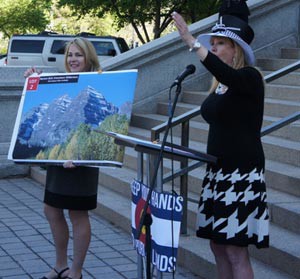 Let’s start the bidding for these mountains at $100.

The fight over federal lands isn’t over entirely — not yet, anyway. There’s still the matter of SB-39, sponsored by part-time militia-dude Sen. Kent Lambert and Senate President Bill Cadman. This bill, which will likely be defeated in the State House before the 2015 legislative session ends next week, seeks to give Colorado “concurrent jurisdiction” over certain federal lands. As part of an effort to draw attention to these bizarre efforts to “claim” national public lands, Conservation Colorado staged a clever “mock auction” of public lands this morning. From a press release (full text after the jump):

The auction served as a warning of the potential for public lands to be sold after the state assumes control and discovers it does not have the financial resources to properly manage current national public lands.

“We don’t need to study or spend one moment more thinking about squandering our birthright, our shared inheritance of public lands.  We have a responsibility to preserve our outdoor heritage for future generations and not lose access to lands that support outdoor recreation, hunting, and fishing,” said Pete Maysmith, Executive Director, Conservation Colorado.

Colorado environmental educators, veterans organizations, and conservation groups joined together today to speak out against attempts to allow the state to seize control of Colorado’s national public lands. Yesterday evening, the Colorado Senate voted against SB 232, while SB 39 is slated for consideration in the Colorado House in the last days of the legislative session.

As part of the press conference, participants conducted a mock auction, which was led by Shelly St. John of Auction Divas. For sale were some of Colorado’s most iconic public lands including the Maroon Bells near Aspen, Dinosaur National Monument in northwest Colorado, and Indian Peaks Wilderness along Colorado’s Front Range. The auction served as a warning of the potential for public lands to be sold after the state assumes control and discovers it does not have the financial resources to properly manage current national public lands.

“We don’t need to study or spend one moment more thinking about squandering our birthright, our shared inheritance of public lands.  We have a responsibility to preserve our outdoor heritage for future generations and not lose access to lands that support outdoor recreation, hunting, and fishing,” said Pete Maysmith, Executive Director, Conservation Colorado. “Attempts to seize our national public lands are meant to satisfy narrow special interests that are far outside the values of Coloradans.  I applaud the bipartisan move of the Senate last night in defeating SB 232.  Unfortunately, one bill remains in the state legislature and opponents remain adamant in pursuing these fruitless and misguided state seizure campaigns. The time to end this charade is now. Instead, let’s devote our efforts to working together to manage our public lands for all Coloradans.”

Recreation alone on Colorado’s 24 million acres of national public lands generates over $13 billion of spending in Colorado, leading to the creation of 122,000 jobs. Not only do local businesses rely on public lands, but returning veterans and those seeking solace and inspiration find refuge in the beauty and grandeur of our wild places.

“I didn’t serve as a U.S. Army sniper in Iraq to have the lands I swore to defend taken away from the public,” said Garett Reppenhagen, with VetVoice Foundation and Operation Iraqi Freedom veteran. “Just as I was trusted to defend the American people from threats, we place our most precious landmarks in the care and management of our federal agencies.”

Finally, our national public lands are key to connecting our children and young people to the great outdoors. This helps stem the tide of obesity in our nation by getting our kids away from screens and outside interacting with the natural world.

“ELK (Environmental Learning for Kids) is an inclusive non-profit organization that develops inspired and responsible leaders through science education and outdoor experiences for underserved, urban youth ages 5-25,” said Amy Wright ELK Education Coordinator. “National public lands are essential for our youth development programs; they provide an equitable chance for all of America’s children — regardless of socioeconomic background — to build a connection to the environment and learn foundational lessons you can only get outdoors. ELK opposes bills that attempt to seize public lands and hopes that these lands continue to be just that—public!”