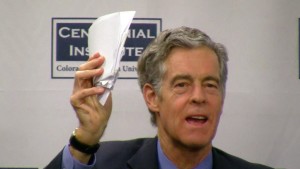 A press release from Alex Hornaday of the Colorado Log Cabin Republicans today announces that the group has been disinvited from this year’s Western Conservative Summit at Colorado Christian University:

“You and your members are very welcome to get tickets and attend, but we can’t officially have the organization as a partner, exhibitor, or advertiser. [Log Cabin Republicans’] worldview and policy agenda are fundamentally at odds with what Colorado Christian University stands for, so it’s just not a fit. [Pols emphasis] I’m sorry it has to be that way.”

“Log Cabin Republicans are known for the hilarious ads painting Jared Polis as a king and the radio ads that aired that featured the ‘Ufestyles of the Rich and Out of Touch’ in an effort to educate Coloradans about Polis’ extremism and hypocrisy. Many of the members of our Colorado chapter are well known conservatives, and one of our board members even ran for the state senate as a Republican,” said Alex Hornaday, spokesperson and vice president.

“At our last meeting we decided we wanted to participate for the first time, have a table, you know nothing huge, but we told we could not participate in any context except as a ticket-buying attendee. Our policy agenda is one that advances a free society, and a freer economy. I think they are missing out.”

“Look, they are a private organization with every right to decide to include whom they wish.” Hornaday clarified, ‘We aren’t going to sue them over this. Nevertheless, a marketplace thrives on information, and this is information that might inform some others’ patronage.”

The Denver Post’s Lynn Bartels follows up this morning with John Andrews:

He reiterated that this morning, telling The Denver Post he was “disappointed” that no one from the Log Cabin Republicans called him to discuss the situation and instead sent out a news release.

.@GovWalker: Does it bother you to be speaking at #WCS15, which uninvited a gay GOP group? http://t.co/w3Ud15DEvf #copolitics

Stay tuned: with the Western Conservative Summit set to host numerous high-profile Republicans including a number of top-tier candidates for president, disinviting the Log Cabin Republicans could become a significantly bigger news story than whoever made this ill-advised decision is expecting. The negative press this move seems likely to generate strikes us as much more damaging to the conference, and the GOP brand in general, than simply allowing the Log Cabin Republicans to be there.

But when you’re blinded by prejudice, you tend to not think about how it looks to others. We’ll update this story as it develops.