On this day in 1743, Thomas Jefferson was born; do the math yourselves. It’s time to Get More Smarter with Colorado Pols. If you think we missed something important, please include the link in the comments below (here’s a good example).

► It’s gunpalooza at the state legislature, likely for the final time in 2015. The State House will hear arguments over a plethora of bills that seek to roll back gun safety measures from 2013. Meanwhile, a new front has opened on the gun safety battle — Dudley Brown and his Rocky Mountain Gun Owners (RMGO) are openly fighting with Independence Institute leader Jon Caldara. You can follow the discussion on Twitter under the hashtag #coleg.

► Hillary Clinton is running for President. For reals. If the rest of her campaign is anything like her well-done kickoff video announcement, she will win in 2016.

► Florida Republican Sen. Marco Rubio is announcing his bid for President today. Can Rubio win the GOP nomination for President? Can he beat Hillary? Those are quandaries for another time, because Rubio will be dogged by one single question: Can he even beat former Florida Gov. Jeb Bush in his home state? 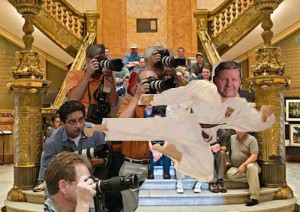 ► TABOR daddy/convicted felon Doug Bruce was back in a Denver courtroom on Friday over charges that he violated his probation from a prior tax evasion conviction. Colorado Springs City Council member Helen Collins was also in attendance and was dogged by a cameraman over her slumlord business dealings with Bruce…until Bruce attacked the camerman, which is kind of his thing.

The Colorado Springs Independent runs down the charges against Bruce, who could go back to jail depending on the outcome of a scheduled hearing on July 13 (in which Bruce plans to represent himself before a judge).

► A new study shows that 9 in 10 adults in the U.S. now have health insurance. Thanks, Obama.

► Police reform legislation continues to march forward in the State House. Down in Texas, Republican Rep. Jason Villalba (R-Dallas) wisely decided to scrap legislation that would have made it illegal for citizens to take pictures or video of police officers. Friggin’ Texas, man.

► The $25-ish billion state budget is on its way back to the Joint Budget Committee (JBC) after winning approval from the State House and State Senate.

► Lynn Bartels of the Denver Post takes a long look at how — and why — Colorado Republicans elected a new state Party chair last month.

► The State House knows more about beer than the State Senate, or something. Joey Bunch  of the Denver Post tries to explain:

The House won the first Hop the Vote Challenge during the Great American Beer Festival in Denver last October. The House’s Representative Saison, the Hopposition Candidate, beat the Senate’s Upper Chamber Fresh Hop Pale Ale with 51.9 percent of the votes from tasters who drank both during the three-day festival.

Okay then. Moving on…

► Boulder resident Scott Smith is running for President. Of the United States. For some reason.

► The Denver Nuggets concluded their home schedule on Friday. The Nuggets have just two road games remaining before putting you out of your misery.