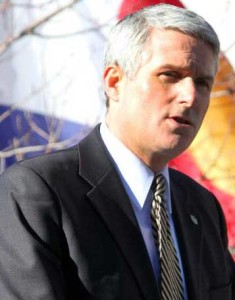 Denver’s 2015 Municipal elections are just a few weeks away, but because District Attorney is technically considered a “state” election, it won’t be on the ballot until 2016. That doesn’t mean that candidates are biding their time until the June 2016 Democratic Primary, however.

Democrat Michael Carrigan announced today that his campaign for Denver District Attorney set a new statewide fundraising record in the first quarter of 2015. To many Denver Democrats, it may seem like Carrigan has been running for D.A. for years, as the Denver Post’s Lynn Bartels jokes in “The Spot” blog, but the first quarter of 2015 is Carrigan’s first official fundraising period as a registered candidate (Q1 was also the first fundraising period for Democratic Rep. Beth McCann, who is seeking the DA post again after an unsuccessful campaign in 2004; McCann has not yet announced her Q1 fundraising numbers).

In the first three months of 2015, Carrigan raised more than $120,000 from 430 different donors, which appears to mark a new statewide record for campaigns subject to $400 contribution limits. According to a press release (full release after the jump):

Carrigan’s first fundraising quarter is particularly impressive given that he is trying to raise money at the same time as 50 other Denver candidates running in May’s Municipal election. Carrigan will publicly kick-off his 2016 campaign on Thursday evening at La Casita in Denver.

The office of Denver District Attorney is the Halley’s Comet of Colorado politics: The seat doesn’t open up very often, but when it does, everybody seems to pay it close attention. Denver District Attorney Mitch Morrissey is term-limited in 2016, and he is only the second District Attorney elected in Denver this century (former Gov. Bill Ritter completed his final term as D.A. in 2004). Because Denver is such a Democratic stronghold, the race for D.A. will almost certainly be decided in the June 2016 Primary Election.

“I am honored and humbled by the large and diverse group of supporters who have helped launch my campaign for Denver District Attorney,” said Carrigan. “Now, more than ever, I am excited for the road ahead of us.”

Carrigan is in his second term as Denver’s elected representative on the University of Colorado Board of Regents. A former prosecutor in the Denver District Attorney’s office under Bill Ritter, Carrigan currently practices law at Holland & Hart. Michael’s official campaign kick-off is scheduled for this Thursday, April 9th, 5-6:30 at La Casita in Northwest Denver (3561 Tejon St.), where he will be joined by Former Secretary, Senator and Attorney General Ken Salazar, Deputy Mayor Cary Kennedy, Representative Angela Williams and many others. Michael and his wife, Sarah, a nurse, live with their two children in East Denver.